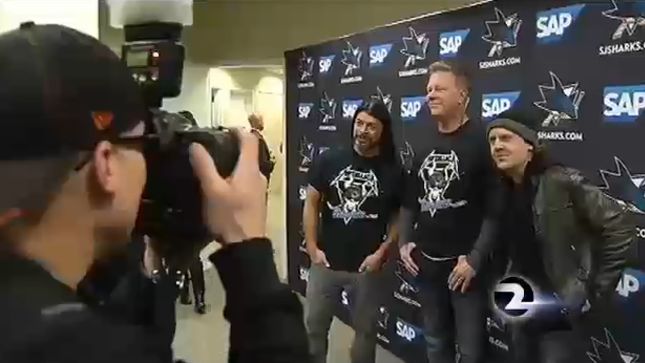 The Kings may have won the Stanley Cup last year, but the Sharks had some heavy metal behind them. Metallica made a rare appearance at their first-ever San Jose Sharks game together.

“Keep it local. We love that the fact we are considered a mainstay of this area and obviously the Sharks are as well so to be joined together makes perfect sense,” said James Hetfield of Metallica.

The band members felt the love from Sharkie who gave them personal jerseys. The band has been based in the Bay Area since the 1980's and say they've been long time fans. In fact, the music when the Sharks step on the ice before each game is Metallica's hit song “Seek and Destroy.”
“It's an incredible honor,” said Robert Trujillo of Metallica. “That song has that kind of energy to fuel an entire team.”

The unique partnership came about after Metallica supported the San Francisco Giants at one of their home games. Jeff Tucker from San Francisco was at that game too. “It's a really nostalgic night,” said Tucker. “I never miss ‘em.”

Earlier in the evening, fans lined up as early as 3 PM in the afternoon. Super fan Max Williamson drove from Stockton. “Just to see them is amazing,” said Williamson. “I've always wanted to see them live and I never got a chance to so this is the closest I've gotten so far.”

In the arena, fans from Sacramento bought special tickets so they could get Metallica t-shirts. Proceeds went toward the San Francisco Bay Area Chapter of the Sierra Club.