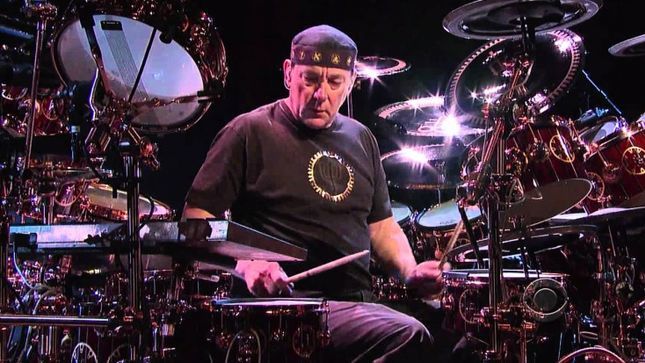 Drum legend Mike Portnoy (Sons Of Apollo, ex-Dream Theater) has checked in with the following update:

"One last tribute to Neil and Rush...

Through all my years in Dream Theater, as the setlist writer in the band I would often throw in one-off Rush covers into the setlists. It was a tradition everytime we played in Toronto as I threw in 'Jacobs Ladder', 'A Passage to Bangkok' and 'The Camera Eye' throughout the years at our Toronto shows. We also covered 'Different Strings', 'Tears' and excerpts of 'Working Man', 'By Tor And The Snow Dog', 'The Analog Kid', '2112 Grand Finale' and 'La Villa Strangiato' through the years as well.

But there was one evening in the summer of 2003 when we were playing at the Jones Beach Amphitheater in New York, that I decided to throw in a real deep Rush gemstone to the completely unsuspecting audience... and later that Christmas, I posted a video from my archives to share it with everybody as a Holiday gift.

I think with Neil’s passing it seems like a timely time to re-share this DT rarity from my archives as a tribute to our biggest influences and our fallen hero...here is DT’s 2003 rendition of Rush’s 1975 classic deep cut: 'The Necromancer'."

Peart, the drummer and lyricist for Canadian rock legends Rush, died on Tuesday, January 7th in Santa Monica, California at age 67, following a three-year battle with brain cancer. Portnoy checked in with the following message shortly after his death :

"My initial post earlier upon hearing of Neil’s passing that has been making the social media rounds was just a spontaneous writing... but honestly there’s so much more I want to say.

I’ve been replaying stories of times we spent together, reading some of his emails to me, looking at some of the personal pics he’s sent me through the years of him and his daughter growing up, etc., and of course, 40 years of his mammoth influence on me... all the Rush shows through the years, etc. I still don’t know if I can properly put all my thoughts down as frankly I’m still devastated and a bit paralyzed with shock (as I know MILLIONS of people around the world are...)

But before I was able to write today’s earlier initial post on social media, I was asked to call into Sirius XM Volume (along with Eddie Trunk) as well as briefly speak with Billboard, so here’s that chat with Billboard for a few further thoughts on the man who will always be my drumming hero."

Following is an excerpt from the Billboard story, published by Gary Graff.

Portnoy: "I discovered him and Rush when I was in high school, back in the beginning of the 80s. He had everything that I always dreamt of becoming. He was just a master of what he did; he played this mammoth drum kit and was the master of the odd time signatures and just had chops for days. At the time, no other progressive drummers were raising the bar to the level he did. I'd never seen or heard another drummer like him. He had the same kind of impact on the drum community that somebody like Jimi Hendrix or Eddie Van Halen had on the guitar community. Like tens of thousands of other young drummers at the time, I just became obsessed with him and everything about him.

That was around the Permanent Waves/Moving Pictures era. Once I got hooked, I worked my way backwards and became completely obsessed with all those albums, especially the progressive ones like Hemispheres and A Farewell to Kings; I even used Pert shampoo! In my high school year book, my future plans were to become the next Neil Peart. He was my God.

What did he do? A lot of drummers would just play a beat, play a groove from the verse to the chorus. They would play something on the high hat on the verse and in the chorus got to the ride cymbal. Neil played his instrument like he was playing a symphony or conducting a classical piece. He was so nuanced and creative. No drummer was playing like that. There are literally nuances in every fill, every groove. Drummers around the world studied that. There's probably no greater air drumming influence than Neil; Every time you'd go to a Rush concert, every drummer knew the fills and was doing them along with him.

To me the benchmark was always 'La Villa Strangiato' from Hemispheres. When I heard that, that was a benchmark of musicianship. That was the greatest challenge to fellow drummers, was 'Can you play 'La Villa Strangiato?'' Learning a song like that was like running the decathlon in the Olympics. And even the most well-known songs and commercial songs, like maybe 'Tom Sawyer' or 'Spirit of Radio', even though you heard them a million times the nuances in the drumming and all the musicianship -- from all three of them -- is of such a high caliber. You weren't hearing players like that on commercial AOR FM radio.

And he was so much more than just a drummer. The fact he was the band's lyricist and wrote such intelligent, poetic lyrics was a huge influence, as well as the books he's written over the past 20 years or so. After the horrible tragedy of losing his first wife and daughter he wrote the Ghost Rider book, one of the most inspirational books I've ever read in my life. Tour after tour he would put out these books of his travels, about how he would get up and go hiking and go riding his motorcycle for eight hours before even arriving at a soundcheck. He was one of those people that was just so inspirational because he lived life to the fullest."