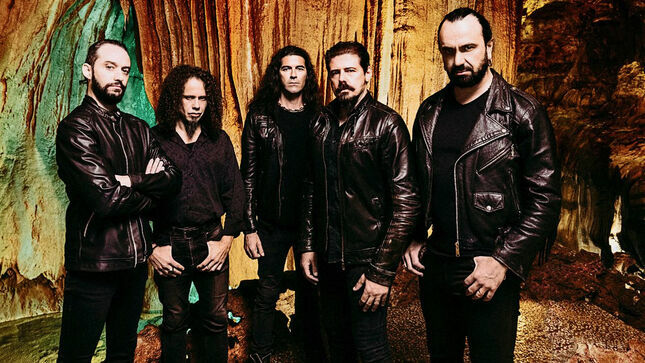 With their forthcoming 13th studio album, Portuguese dark metal giants, Moonspell, are approaching their 30th anniversary as a band more ambitiously and stronger than ever. Frontman Fernando Ribeiro spoke with Rock Overdose about the band's forthcoming album, Hermitage. Following is an excerpt from the interiew.

On the creative process for Hermitage

Ribeiro: "It gets different, I think that Moonspell is never happy with the music we do. It's been like this since Wolfheart. Everybody thinks this Irreligious. And for sure, I respect people's opinion. But dissatisfaction, it's our true engine, you know, so it's not that we hate it, it's just that we feel we can do different. Not better. Not worse, hopefully, but different. So that's the kind of engine that we use mostly for the songwriting. It works for us because for us making music, is not about sticking to a plan or to a formula. Maybe we don't know how to stick to a formula. I think a lot about this. So we try to go and do something that we find original and that we find good enough to share on an album. And Hermitage was not different when it came to that to that process. Pedro and Ricardo wrote the all the music, I wrote all the lyrics. I had the concept, we were many times together.

And then, as I said, in January 2020, we were still working on it. In March, we took a break because of the covid. And then when we could circulate again, we went to our studio to produce it and be together. So it was more or less the same process also with the new drummer, but different songs, different goals as well. And what I told Pedro and Ricardo, because there was a time I thought the music was like, can I say not going to the place that we were trying to? But I said, well, I think you guys are too stuck probably to the musical tradition or to the fear of losing fans and I believe Hermitage is an album that not everybody would like, but true Moonspell fans will like it.

I'm sure this is very personal between us and them because he has a little bit of everything that we did. And it has an underlying statement that it's Moonspell playing in your room. It doesn't have special guests, it doesn't have girl singing, doesn't have, with all due respect, of course, doesn't have like orchestras. No, it's just, you know, what five guys in the band can do with their instruments and their capacities. And I think that's the message of the album. Honestly, I think that nowadays for us to keep together as a band, it's very important to make new music that is meaningful for us. And on the other hand, I know perfectly that we want to reach a great number of people, I think it's time. Our audience is already solid and the right people.

That's what we we want to do in the last years or in the few years that we still have left, as Moonspell. To play for people that love the experience of listening to music. Not to those people that are always like 'Aaah, just back to the past.' Come on, I wanted to get back to the past, of course, when I had all my hair and I was a young wolf howling through the streets of Europe. But that's gone. So life is different now and music is different because of it as well."

Hermitage will see the light of day on February 26 via Napalm Records, and invites us on an entertaining and revolutionary journey through the darkest days of human existence.

"Hermitage is an open-hearted invitation to simplicity. To be humble. To be thankful. To serve you solace. Provide you comfort, entertainment,” vocalist Fernando Ribeiro recently said. "We sincerely hope this call reaches you. That you kindly accept what we offer. That you take our music with you to the place you must feel as yours. To your secret place, to your hermitage.”

The band recently released the video for "All Or Nothing", and now take you behind the scenes. Watch the new footage, as well as the official video, below:

Hermitage was recorded, mixed and mastered this past summer by Jaime Gomez Arellano (Paradise Lost, Primordial, Ghost, Sólstafir & many more) at the Orgone Studios in the UK. Building upon the album’s dark, revolutionary and sensitive facets, it’s a wonderfully intuitive and epic ride by one of the most distinctive dark metal bands of all time, and a testament to what they’ve always loved the most: Honest, emotional metal that binds us even in the darkest times.

Hermitage will be available in several highly limited and collectible Deluxe and Die-Hard Editions, Mediabook, and Cassette (all of them including the Candlemass cover "Darkness In Paradise") but also in Jewelcase and Digital formats. The Deluxe Box will also include an etched 7’’ Vinyl with another special bonus track, “The Great Leap Forward", as well as much more exciting additional collectible items.