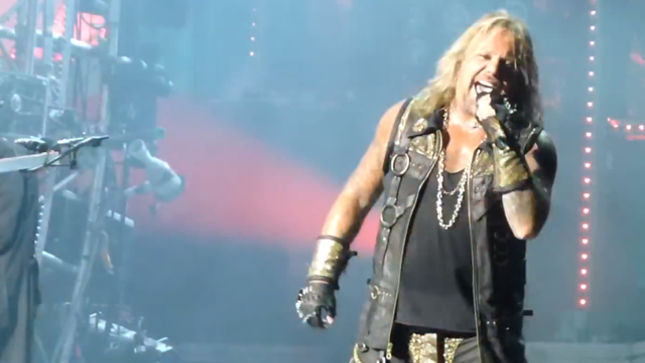 Mötley Crüe singer Vince Neil has gone to court to force an Oregon woman to relinquish control of his social media accounts, reports Las Vegas Review-Journal’s Carri Geer Thevenot. In a lawsuit filed Friday in Clark County District Court, Neil claims Kristy Sinsara is making unauthorized posts that the public and his fans believe are being made by him.

“Sinsara maintains control over the accounts because she is using them to trade on Neil’s fame and celebrity as a means of promoting Sinsara and her works,” the complaint alleges.

In a telephone interview Wednesday evening, Sinsara denied the allegations and said she suspects the lawsuit stems from her dispute with Neil’s girlfriend, Rain Hannah.

“This is not a Vince thing,” Sinsara said. “This is a Rain Hannah thing.”

Sinsara said she gave the Facebook password to Slaughter bassist Dana Strum, Neil’s tour manager, but refused to give it to Hannah out of concern for Neil.

She said Neil never paid her to manage his social media accounts. Instead, she said, he agreed to help promote her as a social media strategist.

“He held up his end of the agreement,” Sinsara said.

Read the full story at this location.

Mötley Crüe will mark the end of their touring career and will conclude their two year Final Tour cycle at the end of 2015 on New Year’s Eve, December 31st at Staples Center in their hometown of Los Angeles where the band’s career began 34 years ago.

Mötley Crüe first announced plans for their 2-year Final Tour by signing a Cessation Of Touring Agreement at a press conference in Los Angeles in January 2014, solidifying the end of their Final Tour at the end of 2015.

The 2014 leg of the Final Tour was one of last year’s top grossing tours, selling close to a million tickets across 72 cities and grossing more than $45 million. “Mötley Crüe’s Final Tour has been a massive global success and a true testament to the popularity of this legendary rock band,” says Rick Franks, Live Nation’s Regional President of North American Concerts. “New Year’s Eve 2015 will mark the end of an era in rock history but there’s no doubt that Mötley Crüe’s music will influence generations of artists for years to come.”

After thirty-four years performing together, the 2015 leg of the Final Tour will see the band play Japan in February, then Australia/New Zealand in spring. In June Mötley Crüe will say farewell to the European Festival circuit with three massive performances at Download (UK), Sweden Rock (Sweden) and Novarock (Austria) Festivals before taking their can’t-miss show back to the US, Canada, and Mexico this summer for 34 final North American shows due to tremendous fan demand.

The North American dates will see the band visit cities such as Chicago, New York, Toronto, Atlanta, Mexico City and will be taking place in arenas exclusively to ensure fans in all cities get to experience the full show production of the Final Tour:

“In some of the cities, we could only reach a fraction of the fans who wanted to come see us play last year because of ticket demand so we’re coming back to those places to bring them our full production including the Crüecifly drum coaster, as well as all pyro and every other bell and whistle. Even despite the overwhelming fan demand we can only add so many new cities in North America because of our commitment to take the Final Tour global on our final year.” says Nikki Sixx (bass).

Audiences can also expect a high-energy performance from very special guest Alice Cooper, who joined the band for the Final Tour in 2014. He will be tearing up the stage for crowds across North America once again. The pairing has been roundly praised as a must-see by fans and media alike.

Coinciding with the announcement and the theme of the Final Tour, the band also released its new single “All Bad Things”. which is available for sale digitally here. The single is accompanied by a video clip of highlights of Mötley Crüe’s 34-year career which can be seen below:

Mötley Crüe are also in the process of putting together the ultimate collector’s album package for the fans to be released later this year which will include the new track, “All Bad Things” amongst many other surprises, details of which will be announced in the near future.

September (with Alice Cooper except dates marked with *)