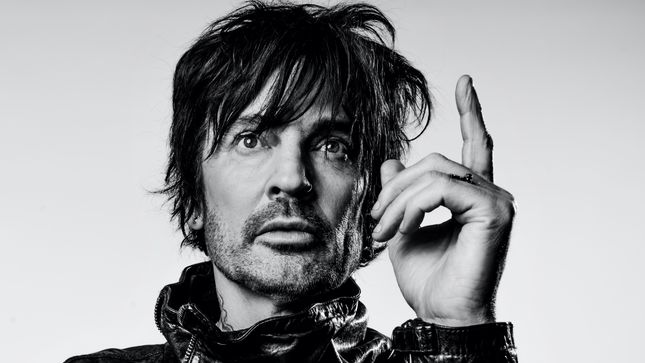 Speaking to Jason Rockmans from Canada’s iHeart Radio, Mötley Crüe drummer revealed he has almost completed another solo album in addition to Andro, which is scheduled for release in October.

Lee spoke about how he’s handling the COVID-19 pandemic: "I hate to say this, because it's weird to say, but it's sort of just… I mean, yes, a lot of bad stuff happened, but for a guy who doesn't really leave his house that much and is often in my studios here, I guess it hasn't changed much for me. Some things have, obviously, but for the most part, dude, I've just been here… "It's kind of fucked up, 'cause I called my manager a couple of weeks ago and I'm, like, 'Dude, I almost have another record done.' And he's, like, 'Woah! Hold up. This one's not even out yet.'

Tommy Lee has released more behind the scenes footage from his latest releases, '"Knock Me Down" and "Tops", from his upcoming album, Andro. Both videos were directed by Fred Durst. Watch two segments below:

In conversation with Tommy Lee about his new music, his abject joy over his new album, Andro, is infectious. The mastermind behind this compelling collection of songs has conquered TikTok amassing 560k followers in the past couple of months, while growing his Instagram audience to over 1 million during quarantine. An audience that eagerly awaits his new opus.

Lee has had a mega-popular Netflix film (The Dirt), starred in and produced three Network TV shows (Tommy Lee Goes To College, Rockstar:Supernova, Battleground Earth: Ludacris vs Tommy Lee), had a NY Times Bestseller (Tommyland) and has appeared on scripted and interview TV shows - most recently, a hilarious appearance as a professor on ABC’s The Goldbergs.

The longtime Mötley Crüe drummer has just spent the last two years writing and recording his new album and it is about to challenge virtually everything you thought you knew about him and his musical proclivities. True, he hinted at some of the complexity behind the chaos, when he formed Methods Of Mayhem and when he toured with Skrillex, Zedd and Deadmaus, but Lee’s new set of tracks seem to truly represent the music that's he was meant to make - and that definitively reveals the depth and range of his musical fascinations. They also represent the male and female sides of music - equally important and equally powerful, thus the name of the album, Andro. Androgyny is a combination of the essences of male and female genders and the album is the manifestation of the concept.

The passion is evident right from the start of Andro, as the album opens with the first of his two singles "Knock Me Down", a paint-stripping industrial-metal stormer (as close as Andro gets to what Lee is best known for) featuring the up-and-coming rapper Killvein, who gives a scorching performance.

"I heard his shit on the internet," Lee recalls, "and I thought, this dude is badass, 'Knock Me Down' had his name all over it. He raps like a beast, is super-talented, and actually says something. He's gonna blow up."

Another singularly fierce pairing on the second of his two singles, is with female South African rapper Push Push, who raps like lightning in her unique accent over a cool Afrobeat groove on "Tops". She comes off as someone who you probably don't want to cross. "She's a total troublemaker," Lee jokes, "a maniac!"

With a powerful singing voice that takes listeners by pleasant surprise in between her staccato raps, Push Push has a down-to-earth attitude and the talents to deliver on her enthusiasm for experimental, barrier-breaking projects. Push Push has worked on a recent Pussy Riot single and has performed alongside the likes of Peanut Butter Wolf and Ryan Hemsworth. Her tracks have been featured on Comedy Central’s Broad City.

Both artists’ videos were directed by Lee’s longtime friend, Fred Durst (Limp Bizkit). As alike as the sets are for the videos, that is how different, sonically, both songs are. “Working with Tommy was an incredible opportunity, he made sure that I was in a comfortable space, free to express myself fully and without limits. The video shoot was a dream come true. I felt empowered to show all my true colors without judgement. Honestly that team could’ve made anyone feel like a star,” says Push Push.

“It was great working with Tommy! It’s crazy because I grew up listening to Mötley Crüe so I never imagined I’d end up working with Tommy fucking Lee,” enthuses Killvein. “I was surprised he’d even heard of me but that’s all thanks to our mutual friend, Danny Lohner. Danny showed Tommy my music last year and that’s when Tommy sent me the beat. I recorded half the song in my garage in Sacramento and the other half in his studio in Calabasas. I was like a kid in a candy shop in there - he has everything. The video shoot was surreal. Getting to work with both Tommy and Fred Durst on that was a dream.”

Other features on the record include a Prince cover from Lukas Rossi (Rockstar Supernova), Josh Todd (Buckcherry), Brooke Candy and Mickey Avalon. A pre-order also launches today and can be found here.