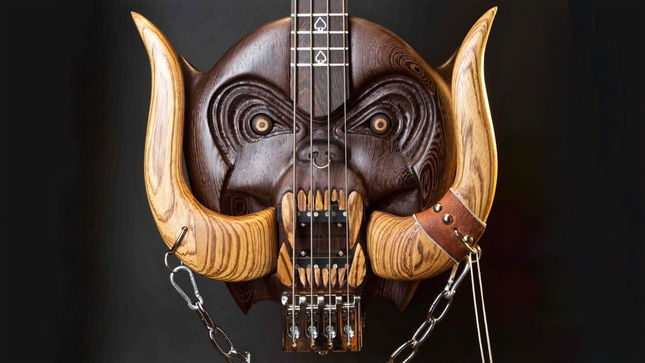 For the past few years, Bloodstock Festival has played host to some unbelievable creations from Cynosure Guitars, reports MusicRadar.com, but this year's instruments are perhaps the luthier's best yet, paying tribute to late, great Motörhead frontman Lemmy.

Two basses are on show: the Lemmy Bass, which brings the Motörhead War-Pig (or Snaggletooth) logo to life, and the more traditional Motörhead Bass, which pays homage to Lemmy's military obsession, in particular WWII-era German military.

Read more and check out a photo gallery at MusicRadar.com.

Says Cynosure Guitars: “So, I think it's pretty safe to ‘officially' announce the unveiling of my latest and greatest creations. I owe all my thanks to Paul Raymond Gregory, Founder and Director of Bloodstock Festival, a very gifted and remarkable artist himself for yet another opportunity to display my skills. Michelle Kerr, for putting this whole editorial together with Cosa Nostra PR. The entire Bloodstock Festival team for always being so very hospitable, generous and down-right badass. My parents and brother for continuous support and love. The dear wife for always being there (and even suggesting some bloody life-saving ideas with the guitars when I'm stressed out 'all the time') and to you all of whom I know you will appreciate.”

Ian Fraser “Lemmy” Kilmister, bassist and vocalist of Motörhead, passed away at his home in Los Angeles, California on December 28th, 2015 just days after his 70th birthday. A memorial was held in his honour on January 9th, 2016 at his famous hangout in West Hollywood, The Rainbow Bar & Grill, and extended across the entire Sunset Strip. Talk of erecting a statue in Lemmy’s honour was already underway and a funding campaign was created to make the project a reality. Fans are welcome to gather at The Rainbow Bar & Grill on August 24th at 7pm as they unveil an immortal tribute to their dear friend and beloved patron Lemmy Kilmister. This event is open to the public.

LA-based artist and friend of The Rainbow and the Sunset Strip, Travis Moore was selected to create a realistic depiction of Lemmy. The result will be a life-size cast bronze statue that will stand at just over six foot tall to be permanently housed at The Rainbow Bar & Grill in a special shrine that is currently being constructed in the patio bar area, reports California Rock News . Travis initially sculpted the likeness as an 18-inch maquette that will then be transferred to a life-size sculpture, which will be molded in wax and ultimately poured and cast in bronze. Check out a timelapse video from Travis below.