MOTÖRHEAD Drummer MIKKEY DEE On Playing With SCORPIONS - "It's A Challenge, And I Love It" 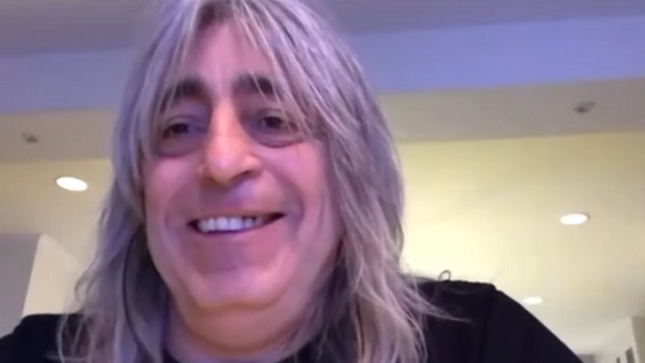 Drummer Mikkey Dee, who played in Motörhead from 1992, up until Lemmy Kilmister's death in 2015, has been behind the kit for Scorpions since 2016.

In the Drum For The Song podcast video below, Mikkey Dee is interviewed by Dane Campbell - the son of his Motörhead bandmate and guitarist Phil Campbell. During the 75 mintue chat, numerous topics are discussed including: how Mikkey saw Deep Purple live at age seven, why he never enjoyed playing the song "Going To Brazil" live, why he doesn't like Motörhead's Hammered album, and much more!

An excerpt, detailing why playing a Scorpions show is more demanding than a Motörhead show ever was, has been transcribed as follows:

"A lot of people say, 'Hey, listen, Mikkey, you're probably sleeping through the (Scorpions) set.' And I'm telling you, this is so much more demanding than Motörhead ever was, physically. Because, as you know, if I was starting to lose my breath here and there with Motörhead, I could just shout at your dad or Lemmy and go, 'Hang on, boys. Have a drink,' and pretend to tune up the snare a little bit. And Lemmy and Phil, they were not very hard to (convince) to get a break. They went around their stacks and took a drink, and we said, 'Cheers,' and you could even actually have a chat on stage for a while. But with the Scorpions, it's all on a click track, because of our screens — the production. And I do play around the click, but it has to work with the lyrics and stuff on the screens and what's going on with the production, which we never had with Motörhead."

"So every show (with Scorpions) is exactly the same length — on the fucking second or minute," explains Mikkey. "Klaus (Meine, Scorpions vocalist) cues whatever he says. So it could be one or two minutes difference between the sets, on two-and-a-half-hour sets. So it's very demanding. It goes up and down, the set, and there's a part in the set after we've done the acoustic medley, and then we come up and do 'Wind Of Change' — I'm actually freezing on stage. And then it's about 40 minutes, 45 minutes of non-stop… We do heavy, heavy songs, and a drum solo, straight into 'Blackout', straight into 'Big City Nights'. I mean, there's 45 minutes where I don't even have a chance to change drum sticks. So that is very, very demanding for me. But it's great — it's a challenge, and I love it. But the more tired I get on stage, the better I play."

"We usually did 90 minutes, with Motörhead, and when we played with other bands, it could be 60 or 70 minutes. But Motörhead, we controlled the set ourselves, and here and there, Phil ran outside and changed his guitar or took a piss, or Lemmy disappeared off stage and no one knew what he was doing. We could run it ourselves more in a different way."