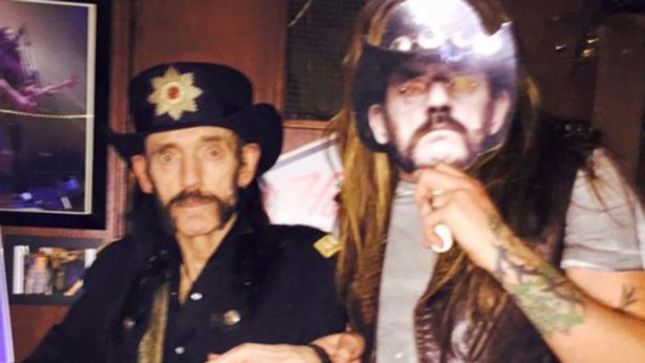 Motörhead frontman Lemmy Kilmister died last night (December 28th) from an extremely aggressive cancer, four days after his 70th birthday. Kilmister was in the above photo with Sebastian Bach, which was posted on December 16th on Bach’s Facebook page, just 12 days before his death. Bach is seen holding a Lemmy mask over his face.

Bach released a message about the passing of Kilmister saying: “Goodbye Lemmy, what else is there to say? Goodbye Motörhead, rock ‘n’ roll will be a little less cool starting today. #endofanera”

Motörhead frontman Lemmy Kilmister died yesterday (December 28th) at the age 70. Metallica posted a message saying, “Lemmy, you are one of the primary reasons this band exists. We are forever grateful for all of your inspiration. Rest In Peace. Endless Love & Respect.”

Metallica guitarist Kirk Hammett released a statement to Rolling Stone regarding the passing of Kilmister:

"Lemmy was the finest of gentlemen.

"Back in 1979, when I was 16 years old, I heard 'Overkill' for the first time. I thought it was the fastest thing I'd ever heard, and I declared to all my friends that Motörhead were the fastest band in the land.

"And I remember very distinctly having a realization that moment — I realized that it was okay to be an outsider, and that it was okay to not feel like I had to conform to anything that I objected to in my teenage life, because, clearly, the Motörhead guys in this picture looked like they didn't conform to anything at all, and boy, it sure looked and sounded like they were enjoying themselves as a result. So I got a lot from that pic and that massive sound and that attitude.

"And I have to thank Lemmy, Fast Eddie and also the recently departed Philthy Animal for the inspiration, spark and fire that I felt so strongly from that night in 1979. That inspiration will always be there with me and may the music of Motörhead live on!"

“My heart goes out to his family and friends.

“The Motörhead organisation are in mourning for their friend and mentor to the management and their fantastic crew. Let's remember Lemmy as he wanted to be: as an iconic song writer and lyricists and R&R rebel.

“I'm sure Phil (Campbell) and Mikkey (Dee) are in shock this was their greatest tour, and I watched them play every night and they sounded great. Sad, sad day.

“Wherever you are mate give ‘em hell.”

“Very sad to hear of the passing of our dear friend Lemmy, he gave so much to the music business and was totally dedicated to his fans. His legend will never die, his life was all about the music, being on stage and a giving pleasure to others.

Iommi’s bandmates, past and present, issued messages for Lemmy earlier:

Bill Ward – “Lemmy, RIP - so sorry you're gone. I stand with the countless souls who will miss you, and who love you very much.”