MYLES KENNEDY On Negative Fan Reactions To Him Performing GUNS N' ROSES Classics With SLASH's Solo Band - "Let People Have Their Opinions; I Just Chose To Tune It Out" 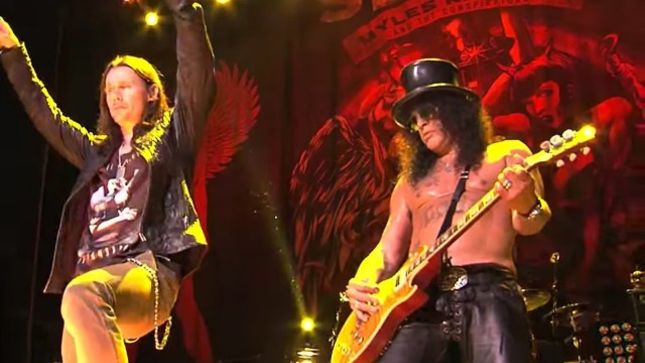 UG: In a recent interview, Mark Tremonti (Alter Bridge guitarist) mentioned how some of Guns N' Roses fans weren't happy about someone else singing G'N'R songs live. Did you receive any negative reactions from the fans while singing with Slash live, and how do you deal with this?

Kennedy: "Well, initially, years ago, when we first started playing together, we would integrate some of the great G'N'R classics into the set. And obviously, people are going to have their opinions. So, you really just kinda have to look at yourself and say, 'Hey, I'm having a good time and that's all that matters and hopefully, a few other people are as well.' So let people have their opinions, that's the kind of world we live in. No matter what you embark on, people are gonna have their opinions and whatnot with social media and all that. I think I just told myself early on in regards to say, reading mentions, or reading reviews or any of that - I just kinda chose to tune it out. I was gonna do what I was gonna do, and that was that."

Since the band announced the cancellation of their entire 2020 touring schedule, Alter Bridge has taken time to do what they are known best for - creating. Never a band to take a lot of personal time off, the band reviewed live recordings from their shows in January/February 2020 to pick a few of their live favourites of songs from their latest album Walk The Sky. This led band members Myles Kennedy, Mark Tremonti, Brian Marshall, and Scott Phillips to begin sharing ideas for a new studio song.

Those collective ideas would yield a new, original song entitled “Last Rites” - a track written, recorded and completed entirely during the COVID-19 lockdown. The final version of “Last Rites”, along with live versions of “Wouldn’t You Rather”, “Pay No Mind", “Native Son”, “Godspeed”, “In The Deep”, and “Dying Light”, will form the new 7-song EP, Walk The Sky 2.0.

The album will also be available in a digital bundle with the original Walk The Sky and Walk The Sky 2.0 EP together as well as a limited edition 2-CD Earbook with both versions included (Napalm Records Mailorder only). All versions of Walk The Sky 2.0 can be ordered here.