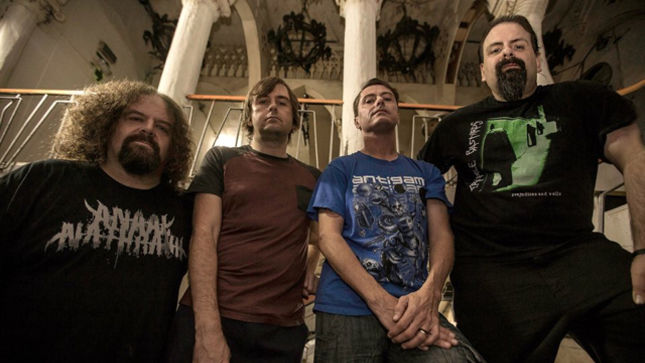 The album’s striking artwork, which can be seen below, was created by Danish designer Frode Sylthe / Friktion.com, who has previously worked on the band’s latest album Utilitarian as well as with bands such as At The Gates, Totalt Jävla Mörker, The Haunted or Burst.

Napalm Death checked in to comment about the artwork as follows: “There are many meanings that you could grab from the new album artwork, I think. But one is the representation of how our natural and most basic needs for happiness and communication are being stripped away by materialism and pre-packaged garbage - crap that we don't need, filtered to us through the media via the megacorporations with the goal to maintain the bloated bottom line of profit. It's all just stuff that will be obsolete in 6 months time. And behind the scenes of course, modern day slavery is alive, well and obscured by this facade. It's all an exercise in deceit to shower us with fake fulfilment, while the poor and underprivileged fall further by the wayside“. - Shane Embury

“Across the albums, we have had some very complex and interconnected artwork. This time we wanted to keep it more simple - strip it down perhaps to a single image that would sharpen the focus. I loved the idea of the supermarket-style packaging as soon as I saw it, as when you go into one of those places with nourishment in mind and you're greeted with some miserable, artificially-enhanced foodstuff contained in a bleak little receptacle of industrial plastics, it doesn't exactly inspire you. To then fill that plastic tray with the dregs of meat production, well, that is the 'easy meat' in the title - representing the people who suffer for burgeoning consumption degraded and dumped in the most pitiful way”. - Mark 'Barney' Greenway

Napalm Death are announced to appear at 2015’s edition of the 70000 Tons Of Metal cruise in the Caribbean (Florida / Jamaica) from January 22nd to 26th alongside bands like Arch Enemy, Behemoth, Blind Guardian, Cannibal Corpse, Municipal Waste and many more.

Napalm Death and Voivod will join forces at the end of January for a North American Tour, aptly titled Through Space And Grind.

Napalm Death have issued the following update: "Due to illness within his family, we would like to announce that Mitch Harris will unfortunately not be performing with us for the near future. We stress that this is not a permanent arrangement, although we are unsure exactly when Mitch will return under the circumstances.

Naturally, we sympathise and wish Mitch all the best for now. In the meantime we will be joined by guitarists who we know can grind it out in his absence. Thanks for your understanding..."

On the upcoming tour, Napalm Death's Mark "Barney" Greenway previously said: "As a celebration of both the unconventional and more straight-out methods of musical attack, I think this tour lineup really hits home. To think that 30 years ago I was marveling at the savage eccentricities of War And Pain and now I'm sharing stage / living space with Snake, Away and co... surreal, almost. From Napalm's perspective, we'll bring the overdrive to the spaciness - it's all going to rage whichever way you slice it."

Voivod's Michel "Away" Langevin states: "I am psyched to tour North America with Napalm Death, for which I always had a huge respect. We crossed paths over the years and finally we'll get to unite Voivod's spacy thrash metal with Napalm's grindcore. A perfect combination!!"