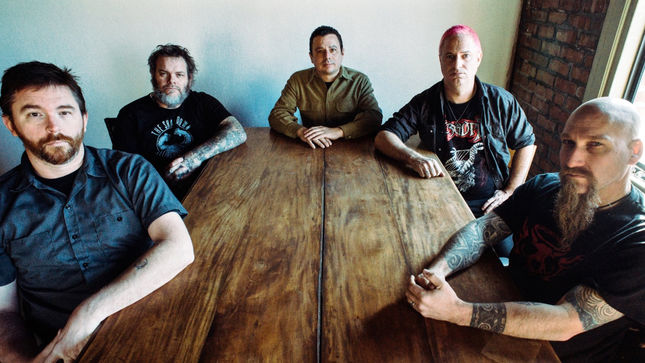 Neurot Recordings is reissuing the landmark collaboration Neurosis & Jarboe, the sprawling album now streaming in its entirety ahead of its official worldwide release this Friday. Originally released in 2003, this revamped version of Neurosis & Jarboe is fully remastered by Bob Weston and features entirely new artwork created by Aaron Turner. Listen via the Bandcamp player:

When two independent and distinct spheres overlap, the resulting ellipse tends to emphasize the most striking and powerful characteristics of each body. Such is the case with this particular collaboration between heavy music pioneers Neurosis and the multi-faceted performer Jarboe, who performed in Swans and who has collaborated with an array of people from Blixa Bargeld, J. G. Thirlwell, Attila Csihar, Bill Laswell, Merzbow, Justin K. Broadrick, Helen Money, Father Murphy, and many others. The musicians pull from one another some of the most harrowing and unusual sounds ever heard from either artist at the time; a sentiment which also rings true to some fifteen years later.

Neurosis' Steve Von Till explains the idea behind the remastering; "Bob Weston [Chicago Mastering Service, and member of Shellac] worked closely with Noah [Landis, NEUROSIS] on making these new versions sound as good as the possibly can. Noah has the most trained critical ear for fidelity out of all of us being an engineer himself. We recorded this ourselves with consumer level Pro Tools back then, in order to be able to experiment at home in getting different sounds and writing spontaneously. The technology has come a long way since then and we thought we could run it through better digital to analog conversion and trusted Bob Weston to be able to bring out the best in it... This new mastered version is a bit more open, with a better stereo image, and better final EQ treatment."

He continues about the original artwork, "Aaron felt he could create something that would unify the energy of both Jarboe and Neurosis in an elegant manner. We let him do his thing and I think it definitely adds to the mystery of the album and sets it apart from the rest of our catalog."

The remastered Neurosis & Jarboe sees worldwide release this Friday, August 2nd through all digital providers, on CD, and for the first time on vinyl, through Neurosis' own Neurot Recordings. The LP is pressed on silver metallic and black swirl colors for their US and EU distributors, and on red and black swirl exclusively for mailorder. Deathwish Inc. will exclusively share the LP in red transparent and gold metallic opaque swirl.

Having completed their most recent tour across Europe alongside labelmates Yob and Kowloon Walled City this weekend, Neurosis will begin their new North American tour next week. Beginning next Wednesday, August 7th, the tour will run through Altanta, Carrboro, Washington DC, Philadelphia, Brooklyn, Moston, Montreal, Toronto, Detroit, and Chicago through August 17th. Joining Neurosis on the trek will be Bell Witch as well as labelmates Deafkids, who are making their North American live debut on this tour. Watch for additional live announcements to be posted in the months ahead.