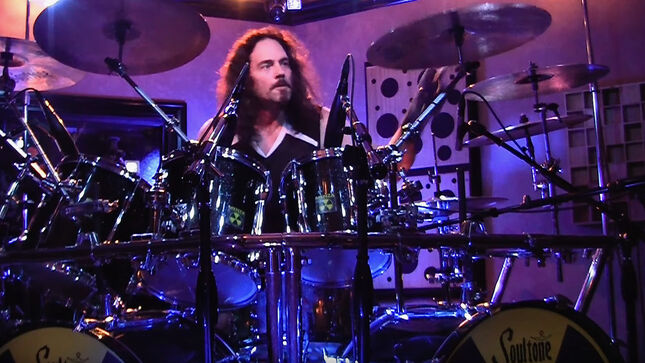 Late Megadeth drummer Nick Menza's family has released the video below, along with the following message:

"Going through some of Nick's personal VHS tapes today from 86 pre-Megadeth days and found this clip of Nick at his childhood home with his very first video camera videotaping his bedroom, guitar, personal paintings and posters he liked to have in his room while he was rocking out to some Loudness.

Video cameras were very new back in the late 80’s and Nick was very fascinated by the idea of being able to videotape cool stuff and play back. A lot more of this sort content of intimate moments with Nick will be available in This Was My Life: The Story Of Nick Menza, the uncensored documentary film that will focus on Nick's life and musical career.

We are excited for the fans to see the life Nick lived before, during, and after Megadeth, it was quite the journey. Stay tuned for an epic documentary, as Nick would say, “it’s gonna be RAD” Thank you everyone for the continuous support in keeping Nick's legacy alive."

David Ellefson has signed several very rare Megadeth tour laminates and tour itinerary books personally owned by Nick Menza to help raise money for the production cost for the official uncensored documentary film, This Was My Life: "The Story Of Nick Menza.

A clip of Ellefson signing the memorabilia can be seen below:

Screaming Butterfly Entertainment recently announced their partnership with David Ellefson / Ellefson Films on This Was My Life: The Story Of Nick Menza. Ellefson has signed on as a co-producer of the film, and also will provide narration to guide the viewer through the exploration of Nick's life.

Ellefson stated: "In forty-second promo clip, that can be seen below. I am proud to announce I will narrate / co-produce the upcoming documentary film This Was My Life: The Story Of Nick Menza and I look forward to sharing together with you the life story of one of musics most celebrated rock star drummers of all time Nick Menza."

Menza's longtime personal manager Robert Bolger said: "I am very happy to connect David Ellefson with Screaming Butterfly Entertainment to narrate / co-produce the project. Ellefson's involvement and knowledge will secure the authenticity of the film. They both spent a lot of personal time together touring world and if anyone knew Nick at best, it's David Ellefson. Nick loved his fans and always said without the fans none this would be possible. I really think Nick's fans will enjoy this journey through his life."

Executive Producer/Director Holly Mollohan from Screaming Butterfly Entertainment added: "I am very happy to welcome David Ellefson to the "This Was My Life" team. He brings with him a wealth of in-depth knowledge and personal experience that will be so valuable to making this film something very special for the fans and Nick's family. I believe that his involvement will be an extremely positive addition to the project, and am excited to collaborate with him on the film."

In conjunction with the announcement of Ellefson's attachment to the film, an Indiegogo campaign has been launched to raise funding for the completion of the film. Fans have the opportunity to support the production of the film directly, as well as obtain some rare, official Nick Menza memorabilia.

These items include various Nick Menza personally owned items - some with authentic signatures from Nick himself. In addition to memorabilia, fans can purchase brand new Nick Menza merchandise including hats, posters, and even Nick Menza skateboard decks. Fans can even have their names and a message added to the end credits of the film.

The campaign can be found here and is now live.

"This Was My Life" will be the first-ever film to memorialize Menza's legacy and celebrate his life exactly how it was. It is described in a press release as "an unflinching exploration into the life of one of the most successful thrash-metal drummers of all time, authorized by the Menza family. From his childhood all the way through to the end of his life including a true blow-by-blow account of the repeated failed attempts of the classic Rust In Peace lineup."

"This Was My Life" will feature rare and never-before-seen photos and video footage from Nick's archived VHS tape collection, personally filmed by Menza himself from 1988 through 1991. Included will be exclusive content showcasing Nick working at the studio, personal home movies, casual time and party time with his fellow bandmembers, as well as other well-known artists of the era that Nick toured with. A screenshot from the film was recently released that featured an interview with former Lamb Of God/Megadeth drummer Chris Adler.