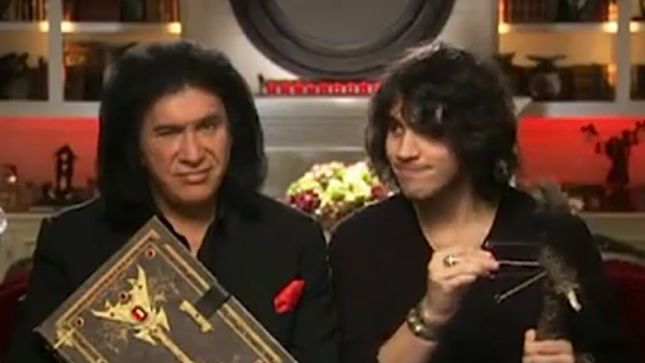 Nick Simmons, the son of KISS legend Gene Simmons, has posted a belated Father's Day tribute to dear old Dad via Vice.com. An excerpt from the article is available below:

"I remember the first year I passed him in height. He looked up at me, then down at my shoes, then up at me again, and said, 'This is ridiculous. I don't like this.' I've only gotten taller, and our interaction has only gotten more comical. If I sit across from him at a restaurant, we will inevitably bump feet. And he'll slam his forehead on the table and say something like, 'Unbelievable. I can't escape.' The T-Rex, the colossus, is long gone. He is just a man, and more interesting for it.

I used to take my father's lessons as an eager student, wide-eyed and receptive. We never used to argue. Today we do, and sometimes things get heated, especially when it comes to politics or social issues. But through it all, I've found that he respects me more in the end, even if we never come to terms, than he did when I just passively agreed.

My disagreement with my father has also made his occasional chafing with the press much easier to digest. It happens at least once a year, and it simply doesn't bother me anymore. Strong opinions are just that—and no matter what you say, there will always be someone with a middle finger cocked and loaded in response, whether from the mob or from an individual.

This lesson applies as much to my father's professional legacy as it does to his fatherhood. He is worshipped and surrounded by yes-men almost constantly now. But his greatest achievements, arguably, were during times of friction, before the yes-men. When he formed the band Kiss, he was a gangly, awkward kid in New York. No one said "yes" to him. He didn't do well with women. People thought he was stupid because he couldn't speak English well. My father and Paul had to fight for every deal and every concert, had to fight against bad reviews and debt and day jobs, had to fight everything, in order to achieve what they did. They had to disagree with everyone. They had to believe that everyone else, every authority, was wrong."