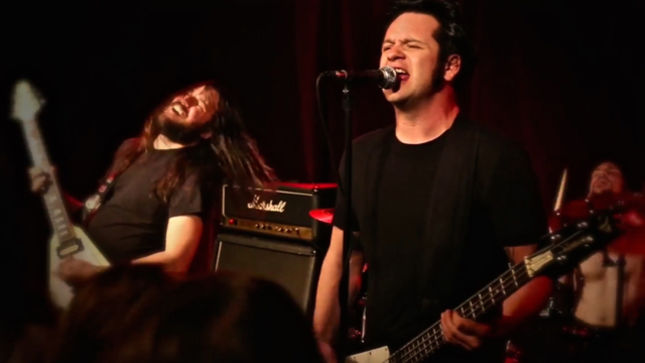 Night Demon have unleashed a brand new music video for the single "Heavy Metal Heat”. Check it out below.

Night Demon will continue touring nonstop in support of their debut album, Curse Of The Damned, released earlier this year. The band has announced a string of new tour dates alongside Holy Grail kicking things off in their hometown of Los Angeles on November 7th at The Echo with special guests Kyng. The complete list of dates can be found here.

The band commented on their upcoming tour dates and the release of the new video:

"What an amazing year it has been so far for Night Demon! Since the beginning of 2015, we have been on a mission to spread the gospel of metal. Starting as early as the first of the year, we traveled the states for the first month with Skull Fist, released our debut full length Curse of the Damned, came straight to Europe for ten straight weeks of concerts, some which included appearances at the Very Eavy fest and Metal Assault. Taking no break, and coming back to America for a seventy date headlining tour, then following it up with an extensive tour of Mexico.

“We now find ourselves finally having some breathing room at home, but not too much, as we are currently writing and demoing songs for what will become the next Night Demon album. We recently played the Frost and Fire fest and are scheduled to perform at the Southwest Terror Fest. But never count the Demon out of touring! We will be again hitting the road this December for the holiday season with our brothers in Holy Grail. We love you all and appreciate the endless support. Lets finish the year strong, and gear up for a new album and much more touring to come. Time to feel the Heavy Metal Heat!"