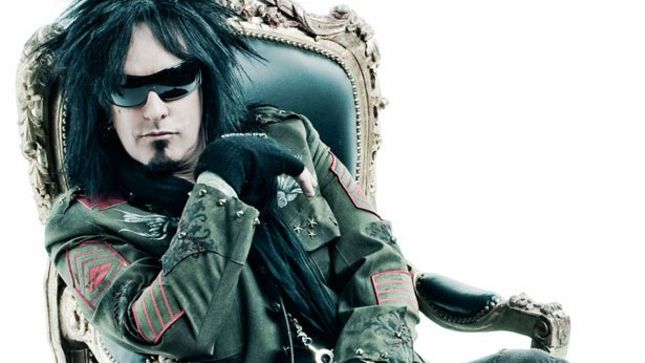 Bassist Nikki Sixx (Sixx:A.M., Mötley Crüe) recently spoke with TeamRock.com and opened up about his experiences doing and overdosing on drugs. Following is an excerpt from the interview.

Q: Were drugs all bad, or did you have good times on them?

Sixx: "I had some very good times on drugs. Definitely. But it all went too quickly."

Sixx: "It hurts. There’s stuff that you don’t really know if you saw it or didn’t see it. For me, there was a very transparent vision of seeing the whole moment – the ambulance, the gurney, a limo. It wasn’t possible, because I was under a sheet. You go: 'Did I see that, or did somebody tell me that?'"

Q: Did it change your outlook on death?

Sixx: "I’m not scared of death at all. In my own broken philosophy, if you live your life right, death is something to look forward to. It gives you a reason to be alive."

Q: What advice would you give the 21-year old version of yourself?

Sixx: "Try not to snort Colombia."

Sixx:A.M. have announced details for their fifth studio album, Vol. 2, Prayers For The Blessed, out November 18th via Eleven Seven Music. The album will be available for pre-order beginning October 14th. Written and recorded at the same time as Vol. 1, Prayers For The Damned, released earlier this year, the album acts as a companion piece to the first chapter while simultaneously elevating the band's sound in every area. Fans can sample songs from the album via the album teaser below.

Touring three continents this year, Sixx:A.M. are excited to bring their music in front of audiences globally and perform the songs from Prayers For The Blessed. Taking their shows beyond the performance, the band made the announcement of Prayers For The Blessed during the first stop of their Canadian tour in Abbotsford, BC and will be shooting the video for “We Will Not Go Quietly” off the new album with iconic director, Wayne Isham, during their show in Edmonton, AB on Saturday, September 17th. That same day, fans will also get a chance to meet the band during an in-store album signing at the West Edmonton Mall. Hosted by HMV Canada, the event will be limited to fans with an official event wristband, obtained by purchasing, or displaying hmv proof of purchase of Prayers For The Damned or album by another one of the bands on the tour (Five Finger Death Punch, Papa Roach, From Ashes To New). Further details on the in-store here.

SixxA.M. will continue to tour across Canada through September 18th with one dollar from each ticket sold on the tour going to the Canadian Red Cross to support their relief efforts. The trio will head back out on the road in October for their highly anticipated US arena tour with Five Finger Death Punch, Shinedown, and As Lions. The tour commences October 18th at Verizon Arena in Little Rock, AR and includes stops Denver, Las Vegas, Anaheim and Philadelphia - full tour routing below. Tickets for the tours can be purchased here.

Formed in Los Angeles in 2007, Sixx:A.M.’s mission has remained steadfast: to provide the masses with iconic, hard rock that boasts unrivaled musicianship. Comprised of vocalist and producer James Michael, guitarist Dj Ashba, and bassist Nikki Sixx, the band has sold over 1 million albums globally of their four previously released studio albums; The Heroin Diaries Soundtrack (2007), This Is Gonna Hurt (2011), Modern Vintage (2014), and Vol. 1, Prayers for the Damned (2016). Prayers For The Blessed is the second instalment of their 2016 double album.