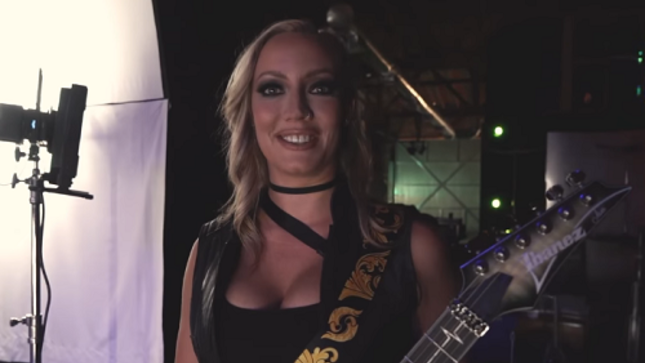 Alice Cooper guitarist Nita Strauss recently released her new solo single and video, "Dead Inside", featuring David Draiman of Disturbed as guest vocalist. Now, fans are treated to a glimpse into the making of the video for "Dead Inside".

This Thursday, November 18th, Draiman will join Strauss on stage at the Whisky A Go Go in West Hollywood, CA during her show to perform the song live.

Speaking on their history making collaboration, Nita shares: "This is my first time releasing my own music with a vocalist, and I am so honored to take this step alongside a legend like David Draiman. David’s voice and powerful lyrics took this song to a level I could never have imagined! And we are so excited to unleash this song on the world."

Draiman adds: "In two days, the song came together - melody, cadence, lyric - the whole nine yards. And the idea behind the song 'Dead Inside', is that we are barraged by a constant tidal wave of information - both correct and incorrect, both misleading and true - too much information in an age of information."