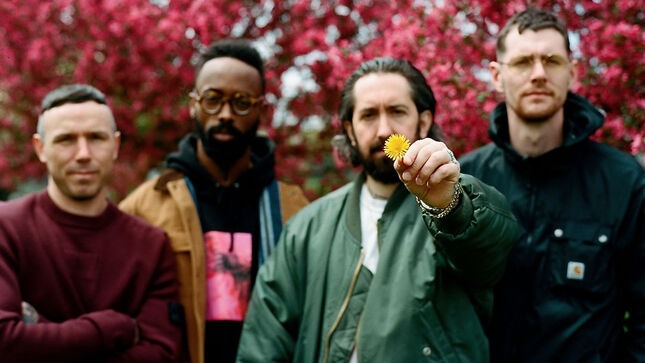 Today, Philadelphia's Nothing returns with a new single and accompanying video, "La La Means I Love You", from their upcoming deluxe album, The Great Dismal B-Sides, set to release on October 8 via Relapse Records.

The Delfonics cover is one of three new Nothing tracks recorded during the band's The Great Dismal sessions to be unearthed with the new release, including "The Great Dismal" and "Amber Gambler". The visual, directed by Dan Swindel & vocalist Domenic Palermo recalls the 70's as the band performs the track with glistening lights and kaleidoscopic effects layered onto each shot. The song is the second track to receive a visual from the deluxe album, following the release of "Amber Gambler" last month.

Speaking on the cover track, Palermo stated, "In the 80's my dad used to cruise around in Philly in this giant cherry red Lincoln he bought with who knows what money because we were broke. He would scoop me up on the occasional summer weekends after him and my mom divorced. I can remember climbing in and having to sit on my hands because the white vinyl seats would be burning hot from the sun. We’d cruise around the neighborhood with the windows down while he blasted Del, Stylistics, O Jay's, Teddy P... a lot of old soul and funk. I always loved the strings and harmonies that were on these records and they stuck with me. I find myself looking to integrate those kind of soundscapes with guitars when I’m recording for Nothing so this song seemed like it would be an almost lateral step for us, just obviously nowhere as cool."

In support of the new extended release, the band will also embark on a run of fall North American tour dates that will kick off in Atlantic City on October 8 and will include pit stops in Brooklyn, Austin, Los Angeles, Toronto, and others, before heading out for a series of EU/UK shows through May 1, 2022.