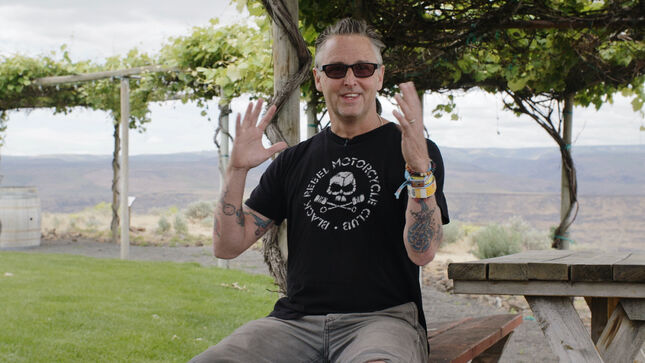 In celebration of movie theaters reopening, and live music returning to The Gorge Amphitheatre in Washington, Trafalgar Releasing has announced a new theatrical release date for Enormous: The Gorge Story. The one-night only event will be on July 21 with additional screenings in select locations. The film chronicles how a family-owned Washington winery, with a makeshift plywood stage, eventually became The Gorge, an internationally renowned concert venue that has attracted more than 7 million fans, and the world's biggest musicians, to a patch of rural farmland "150 miles from nowhere.”

From the amphitheatre’s origins to its social impact, this heartfelt documentary blends together personal stories from music legends Dave Matthews, Mike McCready (Pearl Jam), Jason Mraz, and Steve Miller, with the emotional narratives of several fans. These stories reveal how the venue launched careers and changed lives forever, while "The Gorge,” ascended to become a Billboard, Pollstar, and ACM winning music venue.

In addition to the full-length film, the theatrical screenings will feature exclusive, never-before-seen interviews with Portugal. The Man, Dierks Bentley, and Phantogram. The night will also include a world premiere of The Enormisodes – five mini-documentaries about The Gorge – along with a blooper reel featuring Dave Matthews, Jason Mraz, and Pearl Jam’s Mike McCready, among others.

“With The Gorge reopening this July, after more than a year of shuttered theaters, music venues, and a dire lack of live communal experiences, Enormous: The Gorge Story couldn’t be releasing at a better time,” said the film’s director, Nic Davis. “Our film is about the power of place. And the power of community. And how some great music got millions of people from around the world to dance together on a patch of rural farmland. Enormous captures the experiences we have all been missing this last year and can't wait to get back to.” 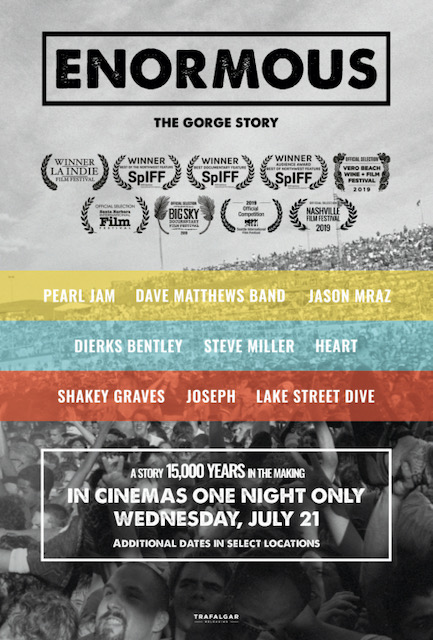 Despite the long trek (and perhaps because of it), The Gorge has become "a pilgrimage for the artist and the audience," according to Jason Mraz, who first played the amphitheater’s parking lot during one of Dave Matthews' epic three-day shows. The setting of The Gorge is unparalleled, and the community among its fans is undeniable. “There’s no place like it in the world,” said Dave Matthews.

“The Gorge is held together by community, and we love that people get to explore its story together in movie theaters across North America,” said Trafalgar Releasing SVP of Content Acquisitions Kymberli Frueh. “This film captures the magic of The Gorge itself and the impact of the live music experience on both artists and fans who travel from near and far to enjoy concerts together—making the live music experience more relevant now than ever.”

The Gorge Amphitheatre is a Live Nation venue located in the rural town of George, WA above the Columbia River. One of America’s premier outdoor concert venues, The Gorge is a 27,500-seat concert venue that has played host to artists such as Bob Dylan, Coldplay, Tom Petty, Dave Matthews Band, Pearl Jam, The Grateful Dead and thousands more. The Gorge has been shuttered due to the pandemic since March 2020 and is scheduled to reopen with the Watershed Festival from July 30 – August 1, featuring Tim McGraw, Dierks Bentley, Thomas Rhett, and Kelsea Ballerini, among others.

Enormous: The Gorge Story will be screened in theaters nationwide July 21, 2021 (with additional screenings in select locations). Tickets are on-sale now at EnormousMovie.com, along with the most up-to-date information regarding participating theaters.