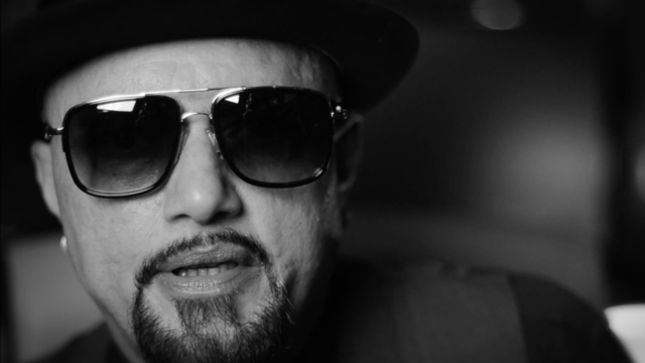 A video for “Re-Inventing The Future” can be seen below:

Perhaps one of Tate's most ambitious recordings to date, The Key examines what one might do if they discovered "the key" to changing the way we view the world, the way we look at time, the way we travel, and could essentially change the human condition... for better or for worse.

Fresh from the creative mind of Geoff Tate, The Key features a dozen songs (see entire track listing below) and marks part one of an epic musical trilogy that initiates that very question within a web of international politics, the world economy and social ethos.

A trailer featuring snippets of four songs from the album ("Burn”, "Re-Inventing The Future”, "Life Or Death?" and "The Fall”) can be found below. Pre-orders are live now via Amazon (links below).

“Choices”
“Burn”
“Re-Inventing The Future”
“Ready To Fly”
“Discussions In A Smoke Filled Room”
“Life or Death?”
“The Stranger”
“Hearing Voice”
“On Queue”
“An Ambush Of Sadness”
“Kicking In The Door”
“The Fall”

The Key is the debut album under Tate's new Operation: Mindcrime banner, a creative platform that continues in the spirit of the historic album of the same name, spawning concepts as grand as the music, and intertwining the intensity of the former Queensrÿche vocalist's iconic past with the provocative, progressive mindset that has made him one of music's most resolute forces and frontmen.

The landmark concept album Operation: Mindcrime thrust Tate's unique social consciousness, style and expertly crafted lyrics into the national spotlight in 1988, and was followed by Empire in 1990, the album that delivered Queensrÿche to arena-headlining status and sold more than three million albums on the back of hit singles and radio staples "Silent Lucidity" and "Jet City Woman”.

By the time the band released Promised Land in 1994, Geoff Tate was universally acknowledged as one of the greatest frontmen in rock and metal, and a driving force behind one of the most innovative bands in mainstream music.

From Mindcrime and Promised Land through 2009's overlooked gem American Soldier - Tate's ambitious concept album that explores the consequences of war as told through the voices of veterans - Tate's 13-album tenure with Queensryche was marked by exploration, intrigue, bold risks and gratifying results.

The Key continues in that fine tradition.

"Musically, this album is quite adventurous," says Tate of his first release in a new worldwide deal with Frontiers Music SRL. "Of course there are key elements in the music, melody and phrasings that are really identifiable, but throughout my career I've opened my eyes and ears to new standards and arrangements, and that's what keeps things fresh and exciting as an artist - we've thrown out the rules for this record, and it's been really liberating. I'm a fan of old prog, and that music didn't stick to rules. It's inspiring and enjoyable to be able to explore, and it's great being in a position to write without constraints."

The results are a series of albums that don't languish in nostalgia, instead offering listeners an opportunity to delve into a world of ideas and inspiration that Tate has been nurturing for the better portion of the last decade. Instead of asking, "Who killed Mary?", Operation: Mindcrime now asks, "What are the implications of changing the world?"

"Like every album I've ever done, people will hear and experience it differently, and that is something that I look forward to," continues Tate. "Music is an intimate experience - your inspirations are unique to you, and will be heard differently through every set of ears and experiences - but isn't that really what makes art exciting? It inspires us all in different ways and for different reasons, and this album is no different. There are quite a few sections of this album that help propel the story with segues and dialogue, but the lyrics don't lay out a breadcrumb trail and tell the story in a linear fashion, there's a puzzle. We have several characters, and three other people singing lead vocals on the first album. That made it even more fun for me and helps give the album its own special character.

"Musically, there's quite a smorgasbord, we've played with sound and established a sound palate - heavy guitar, obviously, cool drumming... all the music is very sophisticated, and there are interesting time changes, the band is playing with different countings and we switch throughout each piece. We can perform the verse in one feel, the bridge in another, and transition to a new chorus, very challenging stuff and lots of different sounds that people probably haven't heard on one of my albums before - new and different guitar sounds and vocal treatments, very dynamic stuff."

Tate makes one point exceptionally clear - Operation: Mindcrime isn't a band, it is a musical project of like-minded people uniting to achieve a common goal. While the songwriting rests predominantly on the shoulders of Tate, Gray and Gane, it's up to every contributor to add their influence and help color the landscape.

"The songs on these records tell a story, and each song is a scene or chapter - every scene is different. The words tell the story, the musical bed, the chord progressions and melodies, they set the pace. That's how I envisioned this album in total, very theatrical and definitely cinematic.

"How do we describe passion?" Tate asks in conclusion, cautiously answering his own question: "Music is a personal journey, and all you can do is write what moves you. That's what passion is - it's so difficult, yet it's such an important human emotion. There are moments on this record that really impact me, the questions raised and the music those questions are set to... I don't know if it will have that same effect on everyone else, but that's where my passion and their passion meet. I do this because I love doing it. I love touring and I love playing live, performing with like-minded people in front of like-minded audiences, and being there in the moment together when all of our passions collide."

And if, in the process, Geoff Tate can tell a story that turns people on end and keeps them talking long after the music has stopped playing? That's not just icing on the cake, that's what it's all about...

That is Operation: Mindcrime.

And come this September, fans will have The Key.