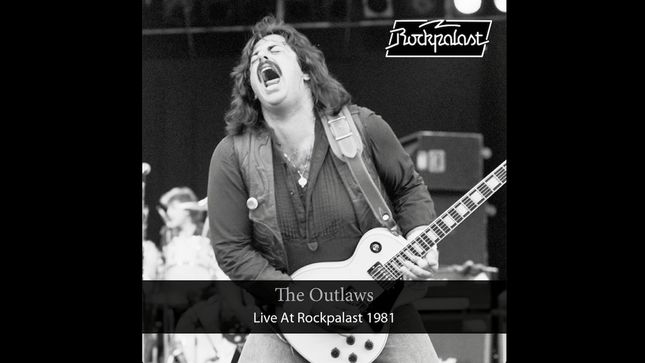 On August 29, 1981, the Outlaws rocked Lorelei in Germany. And now, fans can see and hear the proof, with the recent arrival of Live at Rockpalast 1981.

60 minutes of southern rock at its finest, the classic Outlaws lineup of Freddie Salem (guitar/vocals), Hughie Thomasson (guitar/vocals), Billy Jones (guitar/voc), David Dix (drums) and Rick Cua (bass) is on display throughout this hour-long performance (issued via MIG), which can be purchased here.

And all the expected early Outlaws classics are included - “Devil’s Road,” “Hurry Sundown,” “Holiday,” "(Ghost) Riders In The Sky," and "Green Grass And High Tides." The track "(Ghost) Riders In The Sky" (original title: "Ghost Riders In The Sky: A Cowboy Legend") was penned by Stan Jones and had already been covered by Johnny Cash and the Blues Brothers, became the new anthem of southern rock fans in the Outlaw version. At Lorelei, the Outlaws played an 8-minute version of “Ghost Riders In The Sky” with a guitar battle between Freddie Salem, Hughie Thomasson and Billy Jones, while the blissful fans in the audience waved an oversized Southern States banner. Another incredible live experience is their other Southern statement, "Green Grass And High Tides", which stretches over a breathtaking 20 minutes.

Guitarist Freddie Salem (who also pens the liner notes for the CD/DVD) remembers: “Speaking for the other Outlaws and myself, after playing in thousands of shows for thousands of people, Lorelei, Germany and the Rockpalast concert will always remain a wonderful and ongoing memory in our career!”

For more than 45 years, the Outlaws have flown the Southern Rock banner like no other band in the land. Known for their unique triple-guitar rock attack and three-part country harmonies, the Tampa-born group"s first three albums on Arista - featuring hits like "There Goes Another Love Song", "Green Grass & High Tides", "Knoxville Girl" and "Freeborn Man" - became Southern Rock milestones, while relentless tours with peers like The Allman Brothers, Lynyrd Skynyrd, The Marshall Tucker Band and The Charlie Daniels Band - as well as performing alongside The Who, Eagles and The Rolling Stones - solidified the reputation of "The Florida Guitar Army" as genre legends.

And now, fans can witness the band at the peak of their in-concert powers, with the most-welcome arrival of Live at Rockpalast 1981.