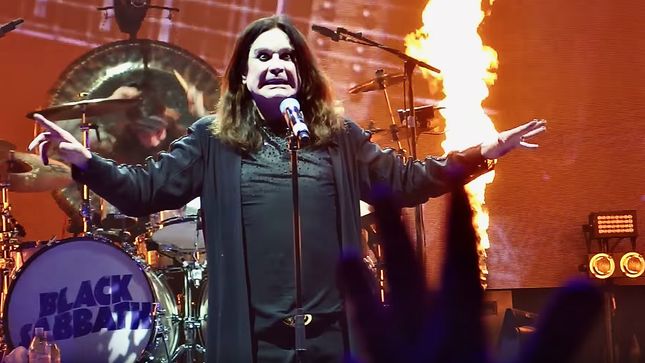 Following a discussion on how Conan O'Brien's late-night set was burglarized, Sharon added: "But I'll tell you what else is wrong. It's my [daughter] Kelly's birthday today. I went out last night to pick up her gift. I give my credit card, and they come back and they say, 'Do you have another credit card? It didn't go through.' And I said, 'Well, just try it again, put it through again.' It still didn't go through. 'Do you have another one?' I said, 'Yes, of course I do.' I hand them Ozzy's. And then they come back and they go, 'Do you have another one? It didn't go through.' I'm, like, 'What's going on?' Somebody rung up charges and maxed out Ozzy's card and my card... I called through to the credit card company, and they go, 'No, no, no. You're maxed out. So is Ozzy, on this account.' I'm like, 'I don't go to that store, or to that store.'"

Ozzy recently announced the postponement of his UK and European shows on his “No More Tours 2” tour. Due to the unprecedented and ever-changing situation, the six-week trek scheduled for October 2020, will move to 2022.

The rescheduled 19-date arena tour, with lifelong friends Judas Priest as special guests, will kick off on January 26, 2022 in Berlin, and includes a brand new date in Hungary, at the Budapest Arena. Fans should hold onto their tickets as they remain valid for all rescheduled tour dates, and refunds must be sought at point of purchase.

Says Ozzy: “I really want to thank my fans for their loyalty and for waiting for me. Believe me, I can’t wait to see you all again. Please stay safe in these uncertain times. God Bless you All!  Love Ozzy”