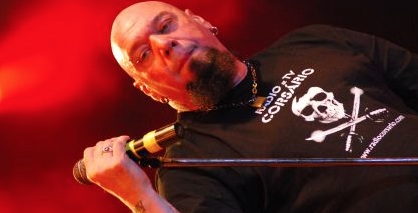 The original voice of Iron Maiden, Paul Di’Anno returned to Poland in April to play a string of live shows. One of the shows - at Lizard Club in Kraków on April 9th - was recorded for the purposes of a live DVD release.

Due to technical problems, The Beast Arises has been postponed to October 27th in Europe and November 18th in North America (via MVD). Other formats: CD and LP (out in December).

The classic Maiden track "Running Free" has been released today and can be viewed below:

The material from the DVD captures a sensational live show in a club full of audience that would not let Di'Anno leave the stage for a long time. The release features mind-blowing performances of the classic material from the first two Iron Maiden studio albums, Iron Maiden and Killers, as well as songs by Killers, Battlezone, and, to top it off, a fierce cover of Ramones’ “Blitzkrieg Bop” - all this making for an outstanding show that will leave no fan in doubt that the Beast has truly risen! The DVD also includes an interview with Paul Di’Anno, a photo gallery and other extras.