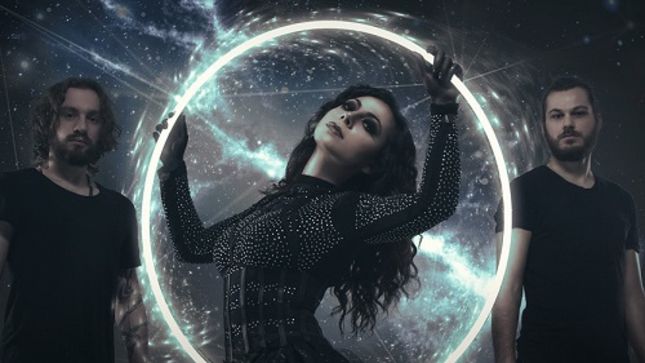 Dutch / Brazilian metal act Phantom Elite have announced that their sophomore album, Titanium, will be released on January 22, 2021. Today, fans can get their first look at the album with the single and video for "Diamonds And Dark".

Phantom Elite is a relatively new metal band fronted by singer Marina La Torraca (Exit Eden, live vocalist for Avantasia) and features songwriting and production from former After Forever guitarist and producer Sander Gommans. Marina and Sander together with Max van Esch (guitars), and Joeri Warmerdam (drums) are set to unleash an incredible slice of contemporary sounding heavy metal music in their sophomore album Titanium. Sonically, the band is a perfect combination of symphonic, progressive, alternative, and heavy metal.

Vocalist Marina La Torraca explains, "'Diamonds and Dark' was one of the first songs we worked on for this album. It was one of those cases where everything just magically clicked and we were wowed by it from the very start. Although it probably has more symphonic touches then the other songs, this single is a good showcase of the quality and heaviness level of the whole album. We are really proud of what we achieved in writing, producing, and developing the concept together as a band (with the contribution of some wonderful professionals like Sander Gommans, Amanda Somerville and Hannes Braun)."

Originating six years ago, the seeds of Phantom Elite sprang from Sander Gomman's HDK project. While releasing the HDK album Serenades Of The Netherworld, Gommans brought together a group of young musicians with the intent of playing HDK's songs in a live setting. The natural chemistry among these passionate musicians wound up sparking a wealth of new and exciting musical ideas and thus Phantom Elite was born. The debut album Wasteland (2018), and the accompanying well received tour of Europe, showed that Phantom Elite are ready to take flight.

"With the support of Frontiers and their decades of history in the music business, we are proud to present the release of our second album with them in 2021,” says the band. "Listeners can expect songs where modern meets symphonic and progressive, (very!) heavy riffs meet epic melodies, all overloaded with a wide spectrum of emotions and love for music. For sure, a high note in our careers!”

Pre-orders can be placed now at this location. For further details, visit Phantom Elite on Facebook.