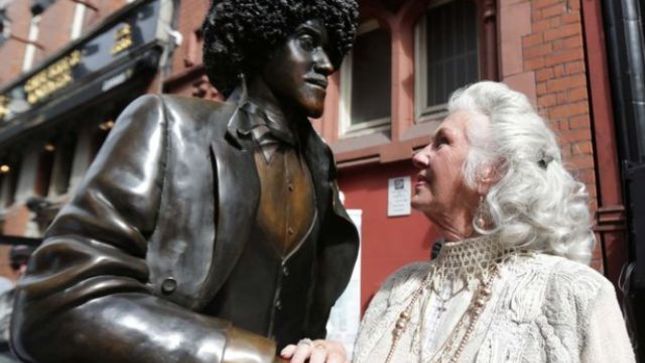 A host of Irish stars paid tribute to Philomena Lynott as the mum of Thin Lizzy rocker Phil was laid to rest yesterday, reports Irish Mirror. U2 sent their respects to the Dublin woman with a floral wreath signed: “Bono, The Edge, Larry and Adam.”

Retired RTE star Anne Doyle said she attended the funeral to ensure Philomena got the send off she deserved. She told the Irish Mirror: “She was a unique person and if you look around at the mixture of people here it’s no more than the tribute she deserves. She’s a very beautiful woman inside and out.”

Dublin musician Brush Shiels said the service brought him back to the first time he met Philomena. He said: “She will be badly missed. We met for the first time on January 11, 1969, which was the day I got married. We had no money and Philip said we would go off to his mother’s hotel in Manchester – the three of us together – and we will stay there for the week. So when we arrived at the airport the first thing she said to me was, ‘I have a job for you with a band staying in the hotel, they are called The Ivy League’. That’s the way it went, the first time I met her she got me a job for two weeks on me honeymoon. And we have been the best of pals ever since. I’m sorry she had to go to the promised land but that’s the way it goes.”

Hot Press editor Niall Stokes, who worked with Philomena on her bestselling book My Boy – about Phil’s life – said: “Philomena was an extraordinary woman. Obviously people know her as the mother of Philip Lynott, who is such an iconic Irish rock star who strolled the stage in such an extraordinary way. But Philip got a lot of his star quality from Philomena. She was a hugely determined woman of unique star quality herself. She was very close to Philip – he loved her dearly, they had an unusual background but they had a great relationship. She was there when Philip died which was terribly tough for her and she found it very difficult to deal with that. But she bounced back and decided to dedicate her life to keeping Philip’s memory alive which was a huge, full-time gig for her.”