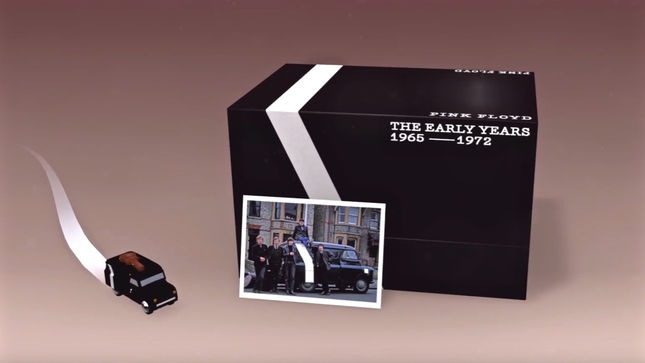 Pink Floyd will release The Early Years 1965-1972 on Friday, November 11th. A comprehensive 27-disc boxed set, it pulls together material from the Pink Floyd archive, as well as licensed Radio and TV recordings, to comprise a deluxe package that includes seven individual book-style volumes, (six of which are dedicated to particular years), featuring much previously unreleased material, as well as bonus content, reproduction memorabilia, and the band's first recording from 1965, released on CD for the first time.

Check out an unboxing video below:

The packages contain more than 100 photographs of Pink Floyd, the majority of which are previously unseen, as well as more than 40 items of memorabilia in special wallets. In addition, Pink Floyd's first five UK singles have been included in the box, on 7" vinyl with replica sleeves.

The six individual year-specific book-style packages will be released separately early in 2017, although the bonus volume, Continu/ation, will be exclusive to the box set, as will the larger memorabilia items, which are reproduced in actual size for the box.

Pink Floyd’s “Grantchester Meadows” (taken from The Early Years 1965 – 1972) is a Roger Waters song, originally performed solo on the Ummagumma album, that celebrates the English countryside, as in other compositions such as “Time”. This special group performance, taped for the BBC, with acoustic guitars and vocals from Roger Waters and David Gilmour, plus additional piano from Richard Wright and taped songbirds, successfully evokes a summer’s day in Grantchester, a small village close to Cambridge, England.

Grantchester’s famous former residents include the Edwardian poet Rupert Brooke, who moved there and subsequently wrote a poem of homesickness entitled The Old Vicarage, Grantchester.

Also released on Friday, November 11th will be a companion edition, Cre/ation – The Early Years 1967-1972, a 2CD collection of some of the highlights of the box set, focussing on the band's material from 1967 to 1972.