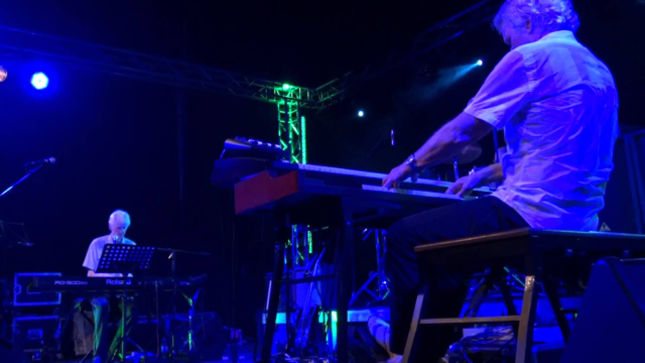 In June 2013, Peter Hammill, Hugh Banton and Guy Evans took to the road in Europe to present a series of live concerts that featured a set list that excited devotees of Van Der Graaf Generator like no other for many years. The band had decided the time was right to present their epic classic piece “A Plague of Lighthouse Keepers” in its entirety on stage for the first time, along with Peter Hammill’s equally epic “Flight”. As the centerpieces of the band’s live set, a series of wonderful concerts took place, drawing on the classic material from the band’s past, as well as their more recent albums such as A Grounding In Numbers.

Fortunately, some of these shows were recorded for posterity and have now been gathered together to form Merlin Atmos. Arguably the finest live album in the history of the band, Merlin Atmos confirms Van Der Graaf Generator as a continuing musical force and explains the loyalty and respect they continue to receive from devotees the world over. Merlin Atmos is a stunning musical statement from a stunningly innovative band.

“The most important thing to note and/or get across about Merlin Atmos is the fact that we played both the long-form pieces “Flight” and “A Plague of Lighthouse Keepers”. The former, of course, had been in the repertoire since the last North American Tour. The latter had only ever been played live once before, as far as we remember, back in the seventies. It was a pretty major commitment to say we'd be doing it even before we'd actually rehearsed together.... We were also, of course, doing it as a trio whereas the original recorded version was as a quartet with David Jackson. It took quite a bit of work to make it stageworthy! I suppose the mere fact that the record is being released proves that we were pretty satisfied with our efforts in the end!” - Peter Hamill