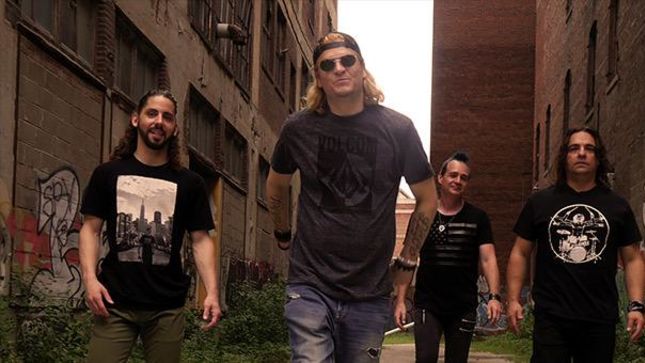 Multi-platinum-selling rock band Puddle of Mudd return with the world premiere of their brand new lyric video for the song "Go To Hell." The track comes from Puddle of Mudd's 2019 album, Welcome To Galvania, which is available via Pavement Entertainment.

"Go To Hell" has always been a personal favorite of Puddle Of Mudd frontman, Wes Scantlin. The song has taken on an exceptionally poignant meaning with the passing of Wes' cousin, Sean Scantlin, and serves as a tribute to him. "Go To Hell" touches on drug addiction and loss in these trying times.

Wes says, "'Go To Hell' is a song about being between Heaven and Hell in your mind. Kind of like when the angel is on one shoulder and the devil is on the other. You turn to God to figure it all out for you and he will! It’s the crossroads in our life. We make a choice about which way we’re going."

Even in the wake of tragedy, Wes' faith stays strong. He says, "My cousin Sean battled demons for a long time and he lost the battle. I know he is in Heaven taking care of me and living his best life! We will see each other one day! We all miss him! He was so young and full of life. So keep your loved ones close and never give up on them. Because no one gave up on me!"

Puddle Of Mudd's newest album, Welcome To Galvania, is available now through Pavement Entertainment. Frontman Wes Scantlin shares the meaning behind the name of the album: "My dad measures my songwriting by the galvanic skin response, which is an electric current. It's when you get goosebumps and you feel this insane, awesome sensation in your body." The album features the top 10 hit single "Uh Oh."

Welcome To Galvania is available to order here.

“Sometimes in life you come across people who want to bring you down and rip apart your soul. Well, those days are gone,” says Scantlin. “I have surrounded myself with a great team of people. They believe in me and I believe in them. I’d like to thank each and every one of them for their hard work and perseverance. I would also like to thank all of my fans for their patience. This is just the beginning. I have a lot more rock ‘n’ roll in me to share with the world!”

Pavement Entertainment’s President Mark Nawara and Vice President Tim King have to say, "We are thrilled to be working with Puddle of Mudd. We are proud to say that Wes and company have officially inked the deal with Pavement." They also add, "Wes is a great songwriter with an extremely unique and iconic voice and the new album is a monster. The band has been selling out large venues around the world. Now it's time to bring new music to the ever growing and hungry fanbase."

Puddle of Mudd will be supporting the new album touring the country this summer and fall into 2020. Click here for more information and tour dates.