On March 30th, Queensrÿche performed in Sacramento, California at Ace Of Spades. a three camera edit of "Empire" from the show courtesy of Capital Chaos TV is available below.

While on their headlining tour through the US, Queensrÿche announced further European tour dates for late fall 2019. They will be joined by Greek power metallers Firewind. Prior to that, Queensrÿche will be playing some of the most renowned European festivals alongside selected club shows in support of their new album The Verdict. New dates are listed below. 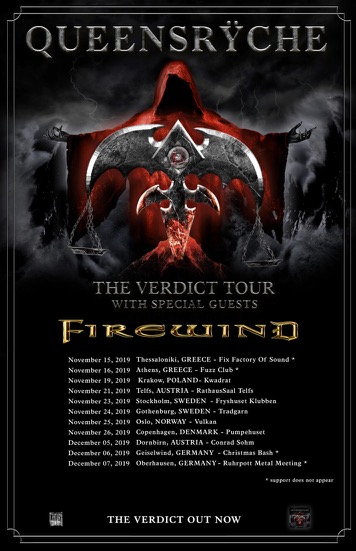 * Firewind do not appear

Queensrÿche have released a video for "Light-Years", a track from  The Verdict, out now via Century Media Records.

"We're very excited to unveil our new video for the song 'Light-Years', from our new album The Verdict, directed by David Brodsky and Allison Woest of MyGoodEye Music Visuals," states Queensrÿche bassist Eddie Jackson about the music video.

"Blood Of The Levant" video: