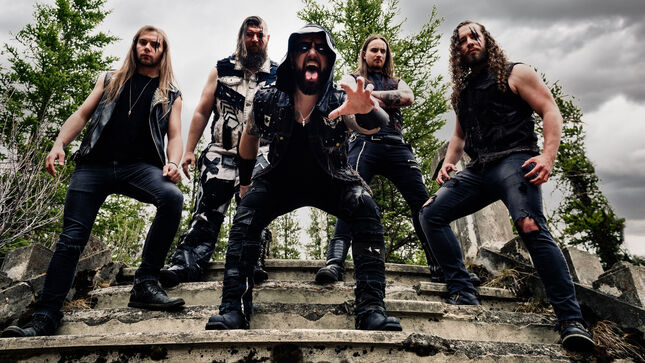 Canadian metallers, Ravenous, have partnered up with Calgary's New Level Brewing for the release of a limited-edition beer, called Speed Metal Blonde. The beer is in celebration of Hubris, the upcoming second album by Ravenous, with the label designed by frontman R. A. Voltaire.

"We have had so many iconic bands and friends of ours release their own booze, it became a symbolic milestone for us! Luckily, with the support of New Level Brewing, we were able to make that milestone come to life - and it's tasty!"

The beer is a smooth and crushable Blonde Ale for those in league with the craft beer devil, with a sophisticated and nuanced profile. Crisp, clean and refreshing, yet metal enough to be the crowd favorite at shows. Ingredients are water, yeast, barley, and hops, with oats added for a fuller body and additional sweetness.

Speed Metal Blonde is only available in Canadian markets and is limited to 1,000 cans - available during all Ravenous show dates in Canada until they're gone. The band's next live performance will be in Calgary, AB on October 15 at Dicken for their Hubris album launch show. Details can be found on the band's Facebook page, here.

Ravenous will be unleashing their new album, Hubris on October 22 via Feast Beast Records for North America plus Europe and for Asia via Spiritual Beast with exclusive bonus tracks “Cakaw Te Partiro” and “一瞬千撃” for the Japanese version.

Hubris pre-orders are available at Indiegogo.