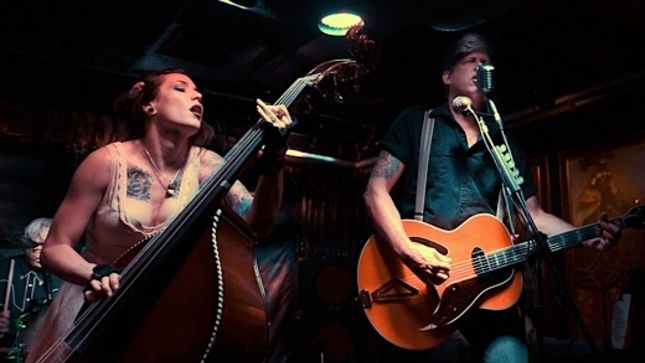 Former Annihilator frontman/co-founder John Bates - who can be heard on the band's legendary Welcome To Your Death demo (found below) - is currently touring Europe in support of his new Big John Bates album, From The Bestiary To The Leathering Room. Bates has been travelling under the metal scene's radar for years, effectively blindsiding BraveWords scribe Carl Begai when he attended a street festival in Fürth, Germany only to discover Big John Bates headlining the opening night (May 22nd):

"As street events go in Germany, the Fürth Festival is a typical annual event taking place in a town square, open to the public, catering to folks from all walks of life that enjoy food, drink, and live music. It wasn't until a few minutes prior to the set that I realized Big John Bates was THE Bates all diehard Annihilator fans know. It was the second time his band has performed on the festival stage in six years, and it was clear by the crowd that at least some folks had come out specifically to see them.

Being as the festival billing was seemingly rockabilly oriented, it was doubtful there would be any shots of metal during the set. Given that the band features guitars, drums, an upright bass - played by the unique co-vocalist Brandy Bones - and a cello, all bets were off entirely. First song in hinted that all was not what it seemed, and as the show progressed it became clear Big John Bates and Co. have their own dark and twisted twist on anything rawkabilly-oriented.  Plenty of original material performed on the night, punctuated by covers of Turbonegro's "All My Friends Are Dead", Judas Priest's "Breakin' The Law" (including cello solo) and Iggy Pop's "The Passenger". Perhaps the best way to describe the quartet is the dark-side of Toronto act The Creepshow, or maybe imagine a rockabilly version of the Misfits featuring Bif Naked on upright bass."


Check out audio samples from From The Bestiary To The Leathering Room here. For more information go to this location.

Bates can be heard on Annihilator's original pre-deal demo, Welcome To Your Death, and wrote tracks with Waters for the band's critically acclaimed first two albums, Alice In Hell and Never, Neverland. He also contributed material to the band's albums King Of The Kill, Refresh The Demon, Remains, and Criteria For A Black Widow.

Welcome To Your Death ('85 demo) tracklist:

"Crystal Ann"
"Welcome To Your Death"