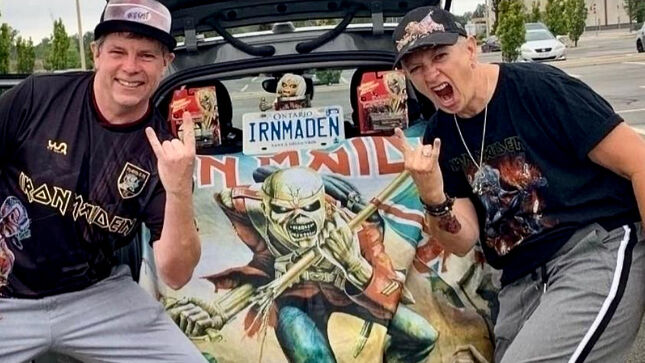 In October  2021, Sharon Burns - the then principal of Eden High School in St. Catharine's, Ontario - posted photos associated with  Iron Maiden's Eddie mascot on Instagram. The main source of controversy was a photo of Eddie which featured a hand-drawn '666'.

After the posting, a parent group from the school attempted to remove Burns by launching a petition accusing her of "allegiance to Satanic practices." The petition, titled "Eden High School Principal, Sharon Burns, Needs to Be Transferred Immediately!" claimed that this image was "not inclusive." The statement further read, "Please replace her with another principal who aligns with the values of the families at Eden and will not sabotage the teaching or upholding of those values and will not try to introduce impressionable students to Satanic practices or symbolism." The petition received 553 signatures.

A counter-petition in support of Burns was kick-started by the students and supporters that received over 20,000 signatures. The original petition seeking Burns' removal was taken down, as well as the Iron Maiden associated photos posted by Burns on Instagram, but the news went global.

Now retired Sharon tells her side of the story for the first time after  being silent for 10 months. Watch the exclusive interview with The Metal Voice below.

Burns: "This is why I wanted to talk to you guys about this  There is a bigger story. The parents (of the school) are great  and the kids (at the school) are great, it's a great community and they weren't out to get me. It was a bad and poor decision on my part to post (Eddie 666) picture, unthinkingly. I should have thought and known better from working at that school for 5 years. It (666) has biblical and religious connotations. I kind of knew that  but I didn't even think about it when I posted it. I posted 666 picture in a school where we were having this shift from what they were used to as a private Christian school to a public school. At one end, I was insensitive and at the other end, offensive, so I took the post down. I should have been aware of the sensitivities around the number. So, lesson learned. I wouldn't do it again, but I will still continue to enjoy Iron Maiden."

Burns: "Probably, it's nice to see that the Principal is a woman and a metal fan. I think that this is an unusual thing for a Principal in High School. So if it helps to connect with a couple more kids who feel like they can come and chat with me if they are having a problem, I would."