RIKI RACHTMAN On Receiving Bullet With Late MOTÖRHEAD Legend LEMMY's Ashes - "It Is The Greatest Gift I Ever Received In My Life"; Video 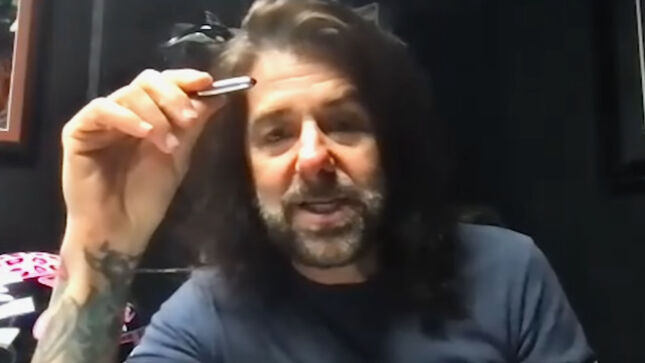 Riki Rachtman spoke with Elliott Fullam of Little Punk People about his new metal show, The Ball, and he also went into more detail about his Lemmy bullet that he received as a personal gift.

When the subject of Lemmy Kilmister came up, Riki explained how personal his relationship was with him: "He was just a very, very kind person."

Rikki later went into detail about his bullet, which contains Lemmy's ashes while showing it off to the camera: "So I got this letter from Motörhead, and I'm reading it, and it says that when Lemmy died he wanted his ashes to be put in bullets and give them to his close, personal friends. And when I read that, it's like my eyes started getting really teary-eyed."

He later continued with: "It is the greatest gift I ever received in my life. It is without a doubt my prized possession. I'm getting it made into a necklace so I can keep it on me everywhere I go."

On the subject of his new show The Ball getting its debut this Saturday, Rikki stated that it will be focusing on heavy music: "For people that are going there thinking 'I wonder which Def Leppard video and I wonder which Warrant video they're gonna play'...for people that can't wait to see which of those videos we're gonna play, you're not gonna be very happy. Because this is a heavy music show."

Watch the full interview below:

Hosted by MTV VJ alumnus Riki Rachtman and presented by Knotfest.com, The Ball will find the former Headbangers Ball host reviving that classic heavy metal music video show feel in an episode that will feature videos from the likes of Megadeth, Metallica, Power Trip, and so much more.

"I think we are all starving for something like this,” comments Rachtman, “There are so many great bands currently making videos that might never get the eyes watching them. I hear the ridiculous comments about rock being dead. I find that to be preposterous. Especially in heavy music. It is alive and the fans are rabid for it. It might be a video you haven’t seen in decades or one that was just dropped. It could be a video you forgot about and watching it brings back the excitement of the first time you saw it. There was nothing more flattering than being stopped and told that I turned someone on to their new favorite band. I’m hoping some of the younger fans get into some of the old-school thrashers and some of us rock vets see how many great bands are out there now grinding. The great thing about Gimme Metal and Knotfest is we are all doing this for the right reasons. The Ball feels more outlaw. No budget; no fancy sets with greenscreen. It’s all shot from my phone."

Adds Gimme CEO Tyler Lenane, “Just like my thirteen-year-old self, a whole generation of fans got their first exposure to metal from MTV’s Headbangers Ball. From the first note of the show’s theme song, Stormtroopers Of Death’s 'March Of The S.O.D.,' you could be sure Riki Rachtman would play something you’d never heard before. We’re genuinely excited to be able to bring The Ball to the Gimme Metal audience of metalheads.”

The Ball will premiere on Gimme Metal TV March 27 at 9 PM, EDT /6 PM, PDT. The event is FREE. To watch, download the Gimme Metal app for free, here, and be sure to catch up with Rachtman in the Live Chat!

View a recent interview with Rachtman, conducted by Knotfest’s Ryan J. Downey, below: