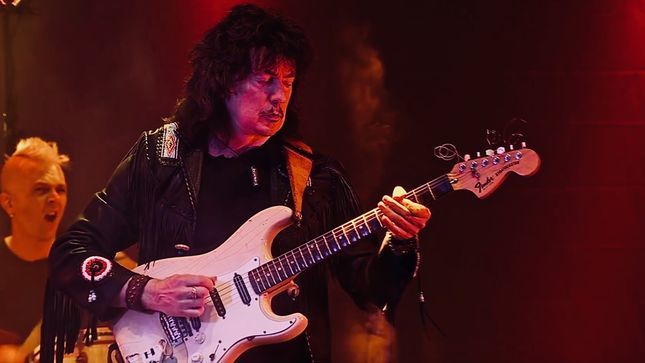 A new interview with Deep Purple guitar legend  Ritchie Blackmore has been uploaded on the Ritchie Blackmore Channel, in which he discusses his scuccessors in the band, Joe Satriani and Steve Morse. Check out the clip below.

Blackmore: "Joe Satriani is a brilliant player, but I never see him really searching for notes; I never hear him playing a wrong note. Jimi Hendrix used to play lots of wrong notes because he was searching all the time... 'Where the hell is that correct note?!' And when he did find that right note, wow, that was incredible. If you're always playing the correct notes, there's something wrong; you're not searching, you're not reaching for anything. But that's not to say that he isn't a very brilliant player. Same thing with Steve Morse...fantastic player.

"I'm just glad they (Deep Purple) found a guitar player to carry on because I thought I was going to be shackled to this band for the rest of my life. It was like a ball-and-chain thing, and luckily they said, 'Well, we found someone.' 'Thank God I can get out!' I haven't listened much, I just know that Joe Satriani and Steve Morse are brilliant players. I remember Steve Morse with the Dixie Dregs, they're fantastic."

In a recent live Q&A session, Joe Satriani commented on his time working with Deep Purple in 1993 and 1994:

Satriani: "They really sort of borrowed me out of my solo career just as it was really entering a very interesting phase, and I didn't think that I'd be able to really give them 100%, and that's what they needed. They were replacing Ritchie Blackmore and they needed someone who was a 100%. Thank God they found Steve Morse because he was a genius."