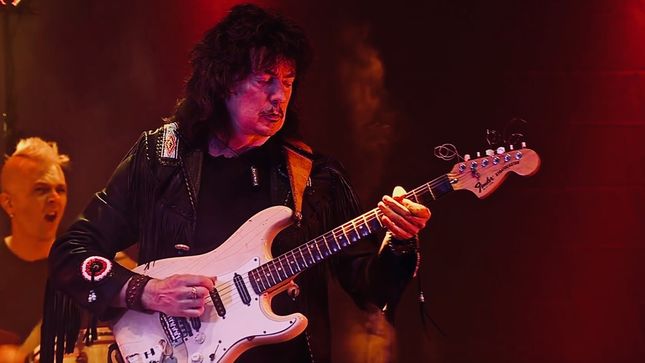 Ritchie Blackmore’s Rainbow will release their new live album, Memories In Rock II, on 2 CD/DVD on April 6th. Also coming up for release will be the first new Rainbow single since 1996, "Waiting For A Sign", out on March 16th. A 10 minute promo giving a sneak peek into the DVD release can be found below.

In 2017, legendary guitarist Ritchie Blackmore brought his new Rainbow line up to the UK for three unique concerts; these memorable musical moments will be released in high quality format on a double disc CD set. Also included in this amazing package will be the first time ever seen backstage videos. Go behind the scenes with Rainbow. Special interviews exclusive to this video set with Ritchie Blackmore, Ronnie Romero, Jens Johansson, Bob Nouveau, Drummer Dave, the lovely backing singers Lady Lynn and Candice Night - as well as the phenomenal crew that brings these shows to the fans; production managers, lighting director, guitar technician etc. Over 1 hour of special backstage interviews and impromptu footage. This is the most unique Rainbow package ever released.

The setlist, combining classic tracks from both Deep Purple and Rainbow, was exactly what the fans have requested most and will be found in this double CD package. A few of the highlights are "Spotlight Kid, "I Surrender", "Mistreated", "Man On The Silver Mountain" / "Woman From Tokyo", "Perfect Strangers", "Black Night" and "Smoke On The Water" - each with Ritchie Blackmore's stellar performance on guitar and solos executed to perfection by the master. His brilliant fret work can never be duplicated and is clearly a highlight of each track of this double CD package.

This double CD will also include a brand new Rainbow song, "Waiting For A Sign". This is the first new Rainbow single released since 1996, featuring Ritchie Blackmore on guitar and Ronnie Romero on vocals.

Disc 1:
"Over The Rainbow"
"Spotlight Kid"
"I Surrender"
"Mistreated"
"Since You've Been Gone"
"Man On The Silver Mountain" / "Woman From Tokyo"
"16th Century Greensleeves"
"Soldier Of Fortune"
"Perfect Strangers"
"Difficult To Cure"
"All Night Long"
"Child In Time"