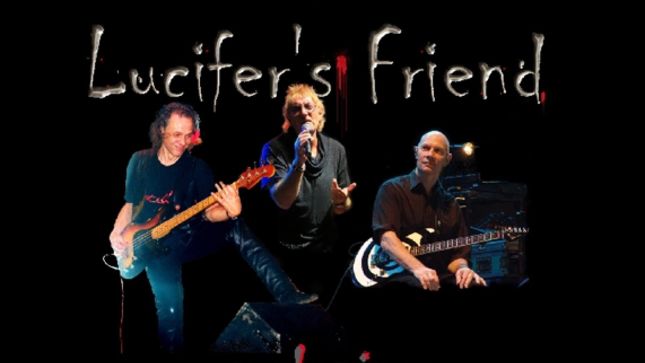 Lucifer's Friend's self-titled debut of 1970 is a famous album among connoisseurs of 70's hard rock. Its heavy and majestic overtones made it a pioneer release of progressive rock genre. Lucifer's Friend continued to create classic albums, especially the three subsequent ones - of which no two sound alike.

In 1976 Lucifer's Friend suffered a hard blow when British vocalist John Lawton jumped ship for none other than Uriah Heep. The band broke up in 1982. The band briefly reformed in 1994 for their ninth album Sumo Grip. Now they're back, after 20 years, literally by the fans' request.

The band will be releasing a compilation, Awakening, which includes new original material, via Cherry Red Records in March 2015. At this stage, the CD is available to pre-order via the Cherry Red website only and all fans placing an order prior to the release date will receive an exclusive signed item.

Pre-order at this location.

The band will be playing Sweden Rock Festival and the reformation is expected to be one of the most extraordinary highlights of 2015!  The band is receiving a variety of offers from around the world and look forward to playing their greatest hits and new material to fans!

Peter Hesslein said: “Over the years I have been asked many times, by all sorts of people, regarding a re-union / re-formation of Lucifer's Friend. As there are currently several international bands releasing cover versions of our old songs and in particular creating a "Hype" about Lucifer's Friend amongst the skateboarder's world-wide, we thought that before it really is too late, to give our fans, especially the younger ones, a chance to experience a part of the founder members of Hard Rock...“

Dieter Horns added: “When I received the first call regarding a re-union of Lucifer's Friend, on the spot I was wide awake and electrified. In recent decades we often discussed the possibility of a restart, made ​​contact with studios and record companies, but now it should finally come true.”

John Lawton then added: “The reformation of Lucifer's Friend has been a long time coming, but we all feel that the time is right…To get back together with the guys with whom I had worked together for so many years and recorded albums that have in many respects stood the test of time, is for me, an upcoming highlight. We’re joined by Yogi Wichman on keyboards, who played on our last album Sumo Grip, but unfortunately the original drummer Addi Rietenbach died many years ago, so we will be introducing drummer Stephan Eggart into the band line-up…”