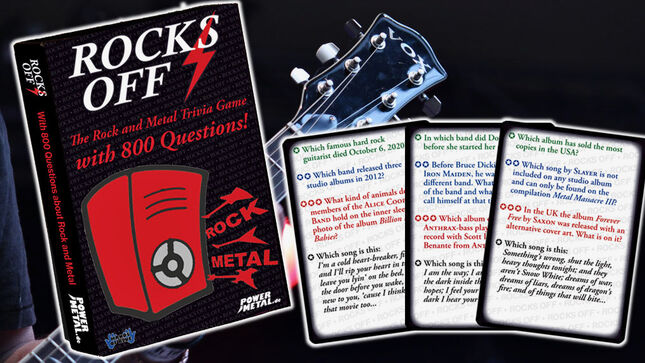 There are many trivia games out there, but none that really r-o-c-k-s. Rocks Off is going to change that by providing lovers of the hard ‘n‘ heavy sounds 800 questions about music, business, bands and people, going from Lee Aaron to ZZ Top, from The Rolling Stones to Napalm Death.

Do you know who was the voice of "Tommy The Cat“ on Primus‘ Sailing The Seas Of Cheese? What Chris Seale, manager of a Virgin records store, was arrested in 1977 for in England? Or why the guys of Def Leppard regularly stopped recording Pyromania at 3 PM in the afternoon? No worries, there are some easier ones there as well. Know your rock and metal and compete with your friends. Are you sure they know more than you do? Find out with Rocks Off. With 600 questions in three different levels of difficulty and 200 questions about song lyrics the game contains enough questions for many evenings.

The game was created by Frank Jaeger, owner of the German music web magazine PowerMetal.de, the questions developed by the contributing staff during months of research. Now the game is ready to be presented to the public and is put up for crowdfunding on the world‘s leading crowdfunding platform, Kickstarter.com. Now it needs your support to be made!