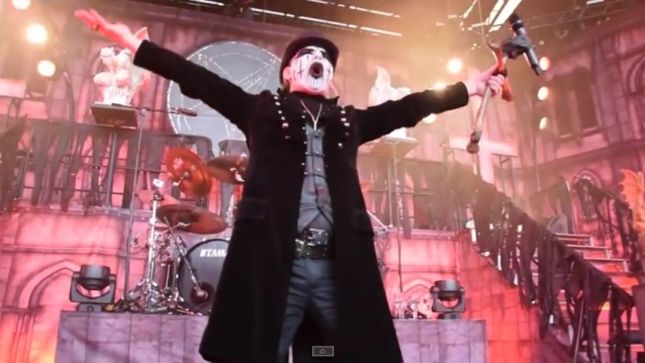 The 2015 Rockstar Energy Mayhem Festival hit the Bay Area for Day 3. The video below shows highlights from King Diamond:

The Rockstar Energy Drink Main Stage features some of the most ground-breaking heavy bands of all time, spanning the originating years of heavy metal to today! The main stage will feature five-time-nominated, two-time Grammy winning legends Slayer as headliner, as well as additional performances from King Diamond, Hellyeah, and The Devil Wears Prada. The Victory Records Stage will feature headliner Whitechapel as well as Thy Art Is Murder, Jungle Rot, Sister Sin, Sworn In, Shattered Sun, Feed Her To The Sharks, Code Orange and Kissing Candice.

Kerry King, guitarist of Rockstar Energy Drink Main Stage headliners Slayer states, “I don't know if third time will be a charm, but it will definitely be hellish! Slayer and King Diamond on stage for the first time together in the States - NEVER has Mayhem been more evil. DON'T FUCKIN' MISS IT.”

Rockstar Energy Drink Main Stage performer and heavy metal hellion King Diamond states, "This is going to be one hot and hellish summer! Slayer and King Diamond on the same stage - it does not get more devilish than this! We will be putting on a one hour set with the full King Diamond stage production. As for a set list, I'm not gonna reveal that here, but it will be built around "Dreams of Horror". The Puppet Master will be there with Grandma, and we will even go as far back in time as to 1777 (hint). You're all in for one hell of a show if you come to this Sabbath!”

“It has been eight years and it feels like it started just yesterday. We are so excited about this year’s lineup and having the mighty Slayer back in support of a new album. In addition, the first time for King Diamond and Hellyeah will be awesome, as well as The Devil Wears Prada’s first time on the Main Stage. The Victory Stage has amazing bands and will play throughout the day. Heavy music is thriving in America and we are excited to be a part of it,” state John Reese and Kevin Lyman, Rockstar Energy Drink Mayhem Festival producers.

The festival kicked off on June 26 at Sleep Train Amphitheater in San Diego, CA and ends at Gexa Energy Amphitheater in Dallas, TX on August 2. See below for all confirmed tour dates.

* Lineups in each city may vary. Go to this location for full lineup details.