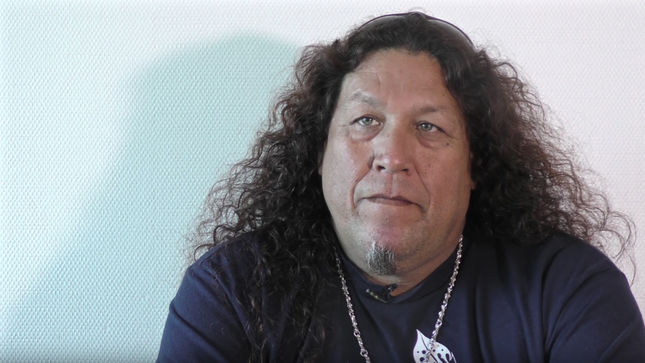 In the new clip below, Testament's Chuck Billy discusses the singers who inspired him when he was young, and who he rates as a frontman:

In another video, Chuck talks about his hobbies outside of the band and how he switched the wheels for sails:

Testament recently released their new album, Brotherhood Of The Snake, via Nuclear Blast. A music video for the album track, “The Pale King” can be found below. The hi-tech clip was directed, shot and edited by Tommy Jones (Slayer, Death Angel) for Videohammer Studios.

"Secret societies, unknown other worlds, and superstitions mark this our 13th music video," comments guitarist Eric Peterson. "We wanted to do a band performance video with abstract ancient alien visuals, which we are set in. I think it's easily one of our best so far, and it was a

Canadian documentary filmmaker Sam Dunn at Banger Films posted his take on the new album for his latest instalment of Overkill Reviews. Check it out below:

“Brotherhood Of The Snake” lyric video:

A complete listing of Testament tour dates can be found here.