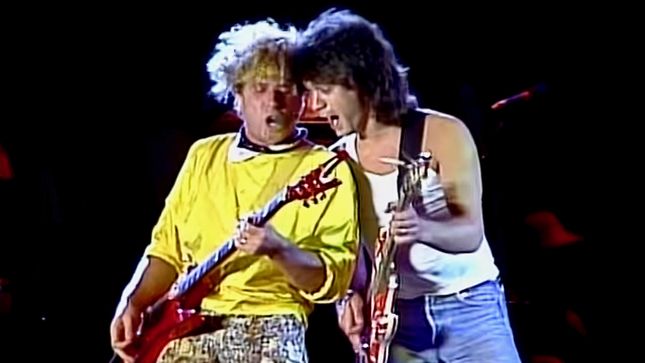 In a recent interview with Rolling Stone, Wolfgang Van Halen talked about how his late father, Eddie Van Halen, had discussed a "kitchen-sink tour" that would have featured singers David Lee Roth and Sammy Hagar (and maybe even Gary Cherone), as well as former Van Halen bassist, Michael Anthony. An excerpt follows:

Rolling Stone: You told Howard Stern that you and your dad discussed a “kitchen-sink tour” with Dave trading vocals with Sammy Hagar and maybe even Gary Cherone. Do you think you could have gotten Dave to do that? I know Sammy would have been down for it, but I just don’t know about Dave.

Wolfgang Van Halen: "I would have loved to see it happen. Unfortunately, we’ll never know the answer to that. I think at a certain point you would have just had to get everybody in a room and just be like, 'Come on, how awesome would this be?'"

Speaking with Eddie Trunk on SiriusXM, Hagar confirmed that he was in full support of doing the tour.

Hagar: "It was totally on my radar. No one had confirmed any of it, but it was obviously what was gonna happen. I wouldn't look forward to having to share the stage with Dave, only because he's not user friendly (laughs). I love the guy, I love the music, all that, but he's just not user friendly. He's always gonna pull something to try to make you look bad and make him look good and all that kind of stuff, but it would have been a blast. Are you kidding me? It would have been a dream come true."