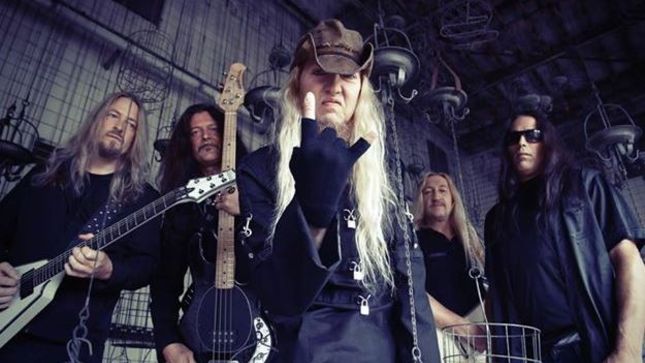 Greece's Rock Overdose recently had the chance to chat with Sanctuary frontman Warrel Dane and guitarist Lenny Rutledge. An excerpt from the interview is available below.

Rock Overdose: Do you believe that young musicians choose a safer path than yours back in the day? Less risk, etc?

Lenny: "I am not sure, I think there are a lot of different cases. For some bands it’s cool to have some views on YouTube and some other are targeting bigger things and doing everything they could do to achieve things."

Warrel: "Everything is different in music bussines during the ages and I think that they do not respect the news bands like before. And all bands will meet some well dressed guy that will fuck them up someday, it happened to us too. The musicians are the last in line and no one asks their opinion. So good musicians are getting lost and so does good music too."

Rock Overdose: So what’s the best and worst thing in heavy metal of 2015?

Warrel: "Oh God, what to say. Best thing in metal is Behemoth. And the worst…. Steel Panther. Sorry, sorry, sorry guys, I know you have fun but I can’t stand it (laughs)."

Warrel: "Thank God no one is like Nickelback, they'e terrible! Worst band ever (laughs)."

Sanctuary will tour Europe in March. The tour starts with a very special show in London before they join the mighty Overkill on a couple of mainland shows while finishing the trip with two headlining gigs in Greece.

Sanctuary's new album, The Year The Sun Died, was released on October 6th in Europe and October 14th in North America and features 11 tracks.

There is a deluxe media book, available exclusively at CM Distro in the United States, which features expanded packaging and the bonus track, “Waiting For The Sun”, originally recorded by The Doors. The vinyl version comes with a CD featuring this bonus track as well.

The 11 songs on the CD and LP are as follows:

Sanctuary was formed in Seattle in 1985, they released two studio albums on Epic Records, Refuge Denied (produced by Megadeth's Dave Mustaine) in 1987 and Into The Mirror Black in 1989. Worldwide touring with the likes of Megadeth, Warlock, Fates Warning and Death Angel, just to name a few, followed each album. Singer Warrel Dane’s sky high vocals combined with guitarist Lenny Rutledge’s more mature take on classic thrash riffs separated Sanctuary from the throes of metal bands struggling to get noticed as at the time. Simply put, Sanctuary offered something fresh sounding in the muddled world of ‘80s thrash.