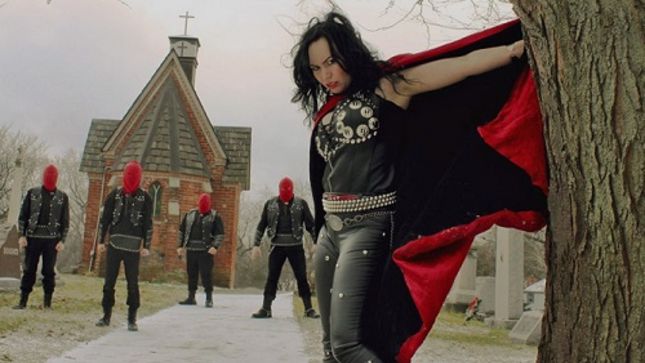 Shadow Kingdom Records has announce the signing of Savage Master. The first fruit of this union shall be the American band's third album, titled Myth, Magic & Steel, which is expected to see release through Shadow Kingdom this autumn on CD, vinyl LP, and cassette tape formats.

One of the most exciting and electrifying bands in today's occult heavy metal scene, for the past six years, Savage Master have swiftly built an impressive canon of work over the course of two cult albums, one EP, one single, and especially their over-the-top live shows.

The band was founded in 2013 by guitarist Adam Neal and vocalist Stacey Savage, so inspired by their love of heavy metal and horror. Soon enough, a mysterious spectacle was created, and it bore the name Savage Master. From there, the band began their assured ascent through the underground, touring non-stop across North America and Europe, playing such festivals: as Keep It True, Hell Over Hammaburg, Legions Of Metal, Frost and Fire, Ragnarokkr, Hells Heroes and many more, and now landing themselves an album deal with longtime fans Shadow Kingdom.

"Savage Master is proud to announce signing with Shadow Kingdom Records," says Stacey Savage. "We feel this label is a great fit for our vision as we look onward toward the journey ahead with our third full-length album, Myth, Magic & Steel."