SAVATAGE Frontman ZAK STEVENS Pays Tribute To PAUL O'NEILL - "Paul Wasn't Only A Boss, He Was My Friend Who Gave Me The Best Opportunities Of My Life" 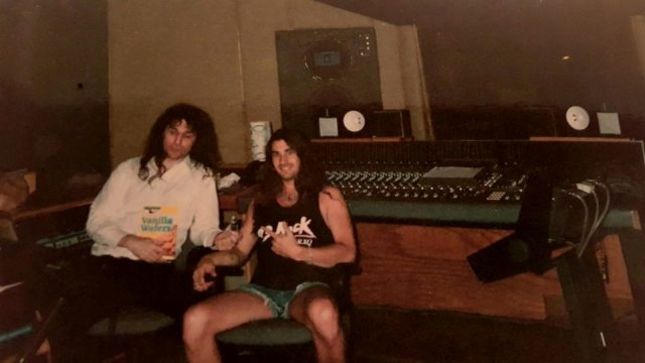 According to Tampabay.com, Trans-Siberian Orchestra visionary Paul O'Neill was found dead last Wednesday afternoon at an Embassy Suites hotel near the University of South Florida in Tampa, said USF Police spokeswoman Renna Reddick. Staff and O'Neill's daughter broke into his locked room, according to a 911 recording, and found his body. An autopsy will determine cause of death. There were no signs of foul play.

Vocalist Zak Stevens, who worked with O'Neill as a member of Savatage and the Trans-Siberian Orchestra, has posted the following message:

"Sometimes words can't describe what is felt with the heart. I've included this picture that is a one-and-only from the Edge Of Thorns album. This picture is special, I'm the only one who has it...and it captures the spirit of what was happening 25 years ago. Paul didn't like to have his picture taken back then. He preferred to be the driver of all things behind the scenes. He was meticulous, and did that to perfection. 1992 was the beginning of it all, the magic had just begun, and to have that magic taken away in one fell swoop again had just left my soul empty and my heart in disbelief. Paul wasn't only a boss, he was my friend who gave me the best opportunities of my life. He went out at the highest point that someone could leave. He left us on top of the world.

I want to thank everyone for the comments, texts, and calls. I read them all. It's a tough time right now, but one thing I've learned from this man is to pay forward all of the good things in your life (and I am so blessed to have many)... so I'm going to honor his legacy by paying it forward every day, and I ask you all to do the same. One kind thing can change the world. Let's do it for Paul."

Paul O’Neill passed away at the age of 61 from “chronic illness”, according to a brief band statement.