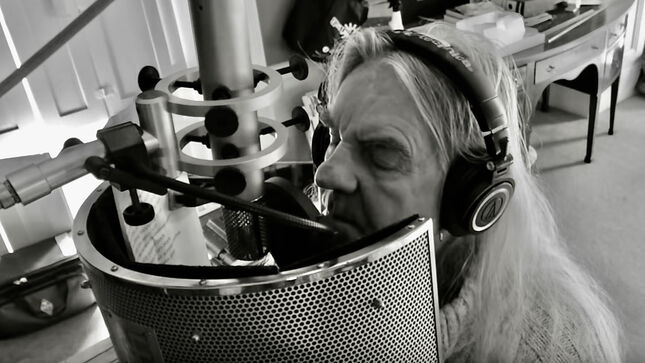 Canada's The Metal Voice recently spoke to Saxon frontman Biff Byford about his band's upcoming covers album, Inspirations, which will be released on March 19, 2021 via Silver Lining Music.

The complete video interview can be seen below, an excerpt has been transcribed as follows:

Did you want the cover songs on Inspirations to sound like Saxon or keep them closer to the original recordings?

"We sort of changed the songs a bit, but it would be a sort of travesty to mess with them a bit too much. I wanted to keep them fairly simple to the original but with a heavier sound, a heavier angle. Obviously my voice is completely different to their voices. I think my voice definitely gives it a different angle anyway. Keep it straightforward but with a powerful performance. For example the song 'Speed King', we played it faster than Deep Purple, just because we can."

How long did it take to record the album and was the album put out to bridge the gap for the new studio album?

"We recorded the whole album in about 17 days, it's a very live album. I don't think there were any overdubs on it, it's very live. It was done in a big house in a big room like the old n days and it was just good fun. We thought the (new Saxon) album has been pushed back, no one has any idea what is happening with the vaccination things or when we will be getting back to the stage. If people like it we will probably do another one next year, it's good fun to do because there is no pressure and the songs are already written (laughs)."

Have you finished the New Saxon Studio album?

"Most of the guitars, bass and drums are done, the vocals are sort of done. I have to do all the vocals at once, so the vocals I already did we will trash them and start again. I think probably after Christmas I will do the vocals on it again. I'm also doing an album with my son Sebastian, we have written some songs together and we will be doing that pretty quickly. Our videos on YouTube are pretty popular. The album with my son will be full on rock with a band. In regards to the new Saxon studio album, they are talking  2021 as the release date but I don't know yet. The whole entertainment industry is kind of gone and forgotten as far as the government is concerned. We are all waiting to see. If the vaccine starts to work, people are able to mix together, then the album will come out. We don't like putting albums out and not tour because we like to tour on the album."

"People keep asking us to do it, whether we will or not we do it I don't know. The thing is I like audiences, I like to be live if you know what I mean. We might do it, we could do it on a smaller scale like me and my son, but I don't think a full production running around on stage in front of cameras with nobody in the room, really doesn't appeal to me. But never say never."

British heavy metal legends, Saxon, will deliver a full-roar-fun-down set of covers with their latest album, Inspirations, which drops a brand new 11-track release featuring some of the superb classic rock songs that influenced Biff Byford and the band.

Set for release on March 19 via Silver Lining Music, Inspirations gets things rolling with the release of Saxon’s crunching take on The Rolling Stones’ "Paint It Black". Biff Byford comments: “Loved this band since I first saw them and heard them. I liked the Beatles, but the Stones appealed to my rebel side; their iconic look… so many great songs, such a great attitude in the music!”

The release of "Paint It Black" is also accompanied by a behind-the-scenes video which was filmed during the band’s recording session earlier in the year. Watch below.

Inspirations was recorded at Brockfield Hall near York in the UK, which was built in 1804 and holds the largest collection of paintings by Yorkshire’s impressionist artists - the Staithes Group. For Byford, recording Inspirations all together within such a rich historical environment was a major ingredient of the project.

“The warmth and feel of Inspirations had so much to do with being together in this magnificent place and doing it ‘old-school’ style,” Byford explains. “This is how many bands back in the day -including some of the ones covered here- made such great albums, so it just felt really good to be able to do this somewhere like Brockfield Hall.”

The results speak for themselves.

“We wanted to do an album based on our influences, the songs and bands that inspired us to write what we did and still do,” continues Byford, “and it was also interesting to see what my voice could do as I haven’t sung many of these songs before.”

Byford does, indeed, take on some new vocal challenges, which he duly smashes on the likes of Thin Lizzy’s "The Rocker". The net result is that whether cranking up a heavyweight take on Led Zeppelin's "Immigrant Song" or throwing down AC/DC’s "Problem Child", Saxon does a supreme job of entertaining both themselves and their audience throughout Inspirations.

"We didn't want to change any of the songs too much, just play them more like Saxon,” concludes Byford, “and we also think it’s very important to have -and share with the fans- some fun in these dark times."

You want even more proof of the validity behind that statement? Wrap your ears around their sparkling take on Toto’s "Hold The Line" and consider Saxon’s Inspirations a mission accomplished.