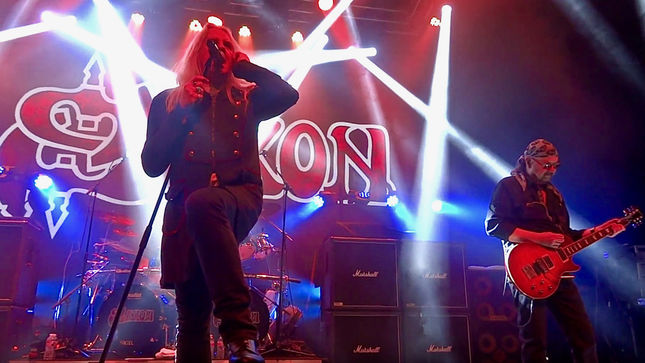 Alan Dixon from Canada's The Metal Voice spoke to Saxon's Biff Byford in Montreal on October 4th as the band was co-headlining the second half of their North American tour with UFO. In the video below, Biff discusses a number of topics, including the band’s next studio album, Thunderbolt, tentatively due in early 2018.

“(The album) will be released January  21st, 2018, I think, which is not too far away,” says Byford. “Andy Sneep finished mixing it yesterday, the artwork is ready. I'm just doing all the credits now for the album cause that is my job as Executive Producer. The musical direction is going to sound like pretty much Battering Ram and Sacrifice, not going to change drastically."

In regards to a song on the new album dedicated to late Motörhead frontman Lemmy: “There is a song dedicated to Motörhead, early Motörhead, when we toured with them in 1980. But yeah it's about Lemmy basically. The Bomber tour. Lemmy was the Mad Max of rock and roll, he was a good mate."

Asked if Saxon ever toured with Ritiche Blackmore's Rainbow in the early days, Biff replies: “We toured America with I Surrender tour, Rainbow, with Joe Lynn Turner and we did tour gigs with the other guy, Graham Bonnet, but Ritchie Blackmore kicked us off the tour for going down too well. But we were at the point where we were really, really happening and we were sort of burning the audience out and he kicked us off the tour. We got to Wembley Arena and Blackmore said, ‘you are not on the tour anymore’. We're like why? ‘Why do you think?’ They were great Rainbow, they just didn't understand us, we were like a bunch of punk metalheads, hard rock guys. "

BMG recently announced the November 17th release of Saxon - Decade Of The Eagle, a deluxe anthology featuring 34 tracks, that looks back at the years that built the Saxon legend.

Decade Of The Eagle is a retrospective that spans the band’s first nine albums and represents the very best of the first decade of their astonishing career during which time Saxon notched up five Top 40 albums and four Top 20 singles. These 4LP (180g vinyl) and 2CD deluxe editions are in a gatefold sleeve that features a special metallic embossed coin on the cover. They also include new liner notes by frontman Biff Byford that document the decade and which are accompanied by rarely seen and classic photos from the era.

Biff says: “These are the albums from a time in the eighties that moved a generation of rock fans around the world, when British rock was once again at the forefront. Great times - never to be forgotten and still reverberating to this day.”

Saxon played a significant part of the New Wave of British Heavy Metal movement, perhaps the greatest metal genre of them all and have become one of the all-time masters of heavy metal. In doing so, Saxon have ensured they are now representative of the heart and soul from the NWOBHM time. Always remaining true to the values which established them in the first place they are driven by a desire to continuously set the highest standards and meet them head on, Saxon's work on those nine studio albums still resonates resoundingly - this is timeless stuff.

Saxon’s music that will continue to inspire metalheads for generations to come, as it has influenced so many until now. In those immortal words, fill your heads with... HEAVY METAL THUNDER!

“Stallions Of The Highway”
“Big Teaser”
“Backs To The Wall”
“Militia Guard”
“Wheels Of Steel”
“747 (Strangers In The Night)”
“Suzie Hold On”
“Motorcycle Man” (live)
“Strong Arm Of The Law”
“Heavy Metal Thunder”
“20,000ft” (live)
“Dallas 1PM”
“And The Bands Played On”
“Never Surrender”
“Denim And Leather”
“Fire In the Sky” (live)
“Princess Of The Night”
“Power & The Glory”
“This Town Rocks”
“The Eagle Has Landed”
“Midas Touch”
“Sailing To America”
“Crusader”
“Devil Rides Out”
“Back On The Streets”
“Rockin' Again”
“Rock N' Roll Gypsy”
“Broken Heroes”
“Waiting For The Night”
“Rock The Nations”
“Northern Lady”
“Battle Cry”
“Ride Like The Wind”
“Red Alert”

Pre-order your copy of Decade Of The Eagle at PledgeMusic.

From being pioneers of the New Wave Of British Heavy Metal, to becoming one of the most successful UK rock acts of all time, Saxon have always transcended definitions, trends and eras. From 1979's Saxon album to Destiny in '88, the band enjoyed considerable success both in the UK and further afield. It's no wonder their influence has spread across the globe, and played a crucial role in the way we look at hard rock and heavy metal today. The decade from '79's debut record was vital, not only in establishing Saxon's talent and reputation, but also in laying the foundations for what has followed.