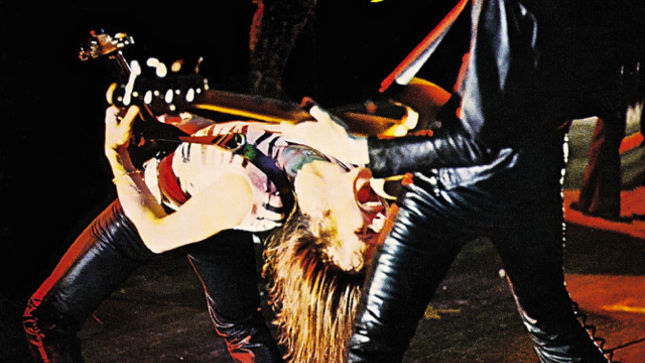 In celebration of their 50th anniversary, rock legends Scorpions have posted the Tokyo Tapes Documentary Part III. Vocalist Klaus Meine and guitarist Uli Jon Roth discuss the album’s artwork and how the visual of Rudolf Schenker bending backwards towards bassist Francis Buchholz is a “cool life expression” and “gives the right vision when you listen to the album.” Roth states that he has signed “probably thousands” of the Tokyo Tapes vinyl.

In Part II, Check out Klaus and Uli telling the story of them performing the Japanese traditional song “Kojo No Tsuki” and Rudolf explaining how a fortune teller promised them a great career but also some difficult times ahead.

Part I of the Tokyo Tapes Documentary can be seen below.

After a massive sold-out show in October 2015, Scorpions are back to rock even harder with an impressive five-night run at The Joint at Hard Rock Hotel & Casino in Las Vegas, NV. Special guests Queensrÿche are returning for each night of the limited engagement.

Performances are scheduled for May 13th, 14th, 18th, 20th and 21st. Scorpions VIP packages are available and include a Meet & Greet/photo opportunity with the band, premium seating, drink voucher, exclusive merchandise and more. For complete package details, visit this location.

Check out a new promo video below:

The band, made up of longtime members Klaus Meine (vocals), Rudolf Schenker (rhythm guitar) and Matthias Jabs (lead guitar), alongside James Kottak (drums) and Paweł Mąciwoda (bass), have created an exclusive set list and production for Las Vegas, and promise fans will not be disappointed by the result.

“We're looking very much forward to seeing all of you in Vegas in May…Are you ready to be Blacked Out? We can't wait to come back for our first ever five-show limited engagement and to rock The Joint again and again,” states Klaus Meine. 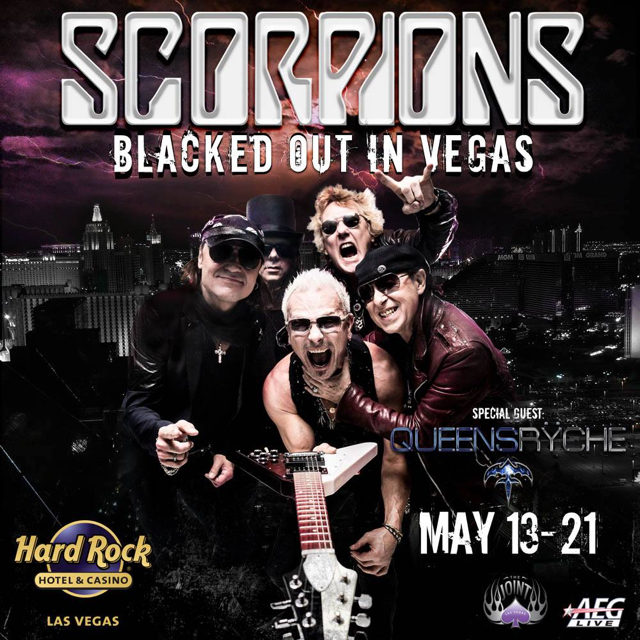 Founded in Hannover, West Germany in 1965, Scorpions were part of the first wave of metal in the 1970’s with their debut album, Lonesome Crow, released in 1972. The band rose to arena status with seminal releases Lovedrive, Virgin Killer and Animal Magnetism. In the 1980s, Scorpions amassed a string of Billboard chart toppers from Love At First Sting and Blackout, including multiple Top 10 singles "Rock You Like A Hurricane" and "No One Like You," as well a string of successful singles such as "Send Me An Angel," "Still Loving You" and "Wind Of Change”.

The band was also ranked #46 on VH1's Greatest Artists of Hard Rock and their hit "Rock You Like A Hurricane" also landed as #18 on VH1's list of the 100 Greatest Hard Rock Songs. Celebrated across the globe, the iconic rock act has sold more than 100 million albums worldwide, and have received multiple honors including a World Music Award, a postage stamp in Brazil, their Star on Hollywood Rock Walk, Echo honors, most recently they were honored with the Lower Saxon State Award. In September 2015, Scorpions released their 19th studio album, Return To Forever, the same year the band celebrated their 50th anniversary.