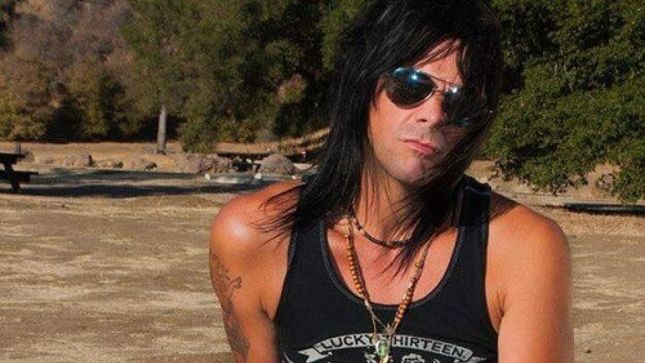 On May 4, 2019, drummer Steve Riley and bassist Kelly Nickels will bring their newly-established version of L.A. Guns to the M3 Rock Festival at Merriweather Post Pavilion in Columbia, MD. Joining the original LAG rhythm section will be guitarist Scott Griffin.

Speaking exclusively to BraveWords scribe Aaron Small, Griffin – who was a member of L.A. Guns from 2007 to 2009, and again from 2011 to 2014 – admits that he was surprised when he got the call from Steve Riley to join this new version of LAG. “Yes, definitely. I hadn’t heard from Steve for a while. I left on good terms with him. But y’know, when you stop working with someone, you lose touch a lot of times. So, it was nice to hear from him.”

During his tenure in L.A. Guns, Griffin played bass, but with the return of four-stringer Kelly Nickels, Scott will be switching to guitar. “Since Kelly got on board, Steve asked if I wanted to take the lead guitar gig. I was kinda blown away! But I played guitar for years before bass, and Steve’s heard me play, so he believes I can do it. I’m just learning all the big songs right now that I’m almost positive will be in the set. I want to rehearse as much as possible. There are certain songs that always have to be there. But if there’s time to add some extra songs, I’d love if we could include a song from Hollywood Forever, the album I’m on. And as a fan, I’m really hoping Kelly wants to sing ‘Nothing Better To Do’!”

To clarify, neither vocalist Phil Lewis or guitarist Tracii Guns will be on stage with L.A. Guns at the 2019 M3 Fest. However, Griffin shares his thoughts on The Missing Peace – the 2017 album from Phil and Tracii’s L.A. Guns. “I had read an article about that album where I think the bass player or drummer contributed a song to the album that he had recorded with his previous band. And there was some drama over that. So, since there were two or three songs that I had written for Hollywood Forever that didn’t make the album, I listened to it once just to make sure they didn’t use any of them, ha ha. They didn’t by the way, so that was cool."

Scott Griffin currently resides in Las Vegas, NV where he plays bass in a hard rock cover band called Sin City Sinners, and sings in an original punk band called Sin City Rejects. Scott also portrays Paul Stanley in a KISS tribute band called KISS Thi$, which he describes as “a group of KISS fanatics who do it for fun.”