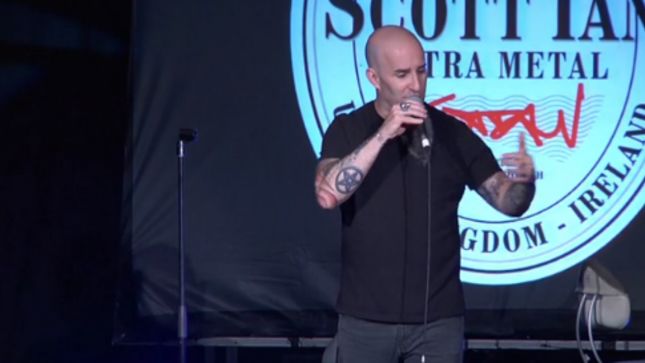 Legendary heavy metal musician, author, and television personality, Scott Ian, had a lot to say on the European and United States legs of his groundbreaking Speaking “Swearing Words” Tour. After decades-worth of international touring with Anthrax, bumping elbows with illustrious (and sometimes ridiculous) characters all over the media spectrum, and undergoing general “you won’t believe this” experiences - Scott Ian certainly had some hilarious and surprisingly personal stories to share.

Swearing Words is an honest look at the insane life that Scott has led for the last 31 years, the people he’s met, and the events that coincide. Now, you can experience Scott’s Swearing Words Tour by way of Swearing Words In Glasgow, available via Megaforce Records on November 13th.

Billboard is exclusively premiering a clip from Swearing Words In Glasgow. In it, Ian recounts the crazy excitement he feels when he meets one of his personal idols, like Lemmy or Black Sabbath guitarist Tony Iommi.

The Swearing Words In Glasgow DVD is a full performance recording, filmed towards the end of the tour run in Glasgow, Scotland, and is being funded by a wildly popular PledgeMusic campaign, which surpassed its goal with the help of gracious and dedicated fans!

To pre-order the DVD or for more information, visit the PledgeMusic campaign page here.

A preview clip below features Scott telling the hysterical story of the first time he met Lemmy back in the early Anthrax days, and the alcohol-soaked hilarities that followed.

Scott Ian is a busy guy. He’s currently promoting his memoirs I’m The Man: The Story Of That Guy From Anthrax, and next month, he releases Swearing Words. Also, of course, Anthrax is often on the road, and the band is working on the follow-up to their 2011 album Worship Music.

But it turns out he has another project in the works, as he told Radio.com's Brian Ives in an interview promoting I’m The Man.

“There’s a band called Mother Superior that you’ve probably heard of: they were the Rollins Band for years. It was Jim Wilson’s band, he’s been Daniel Lanois’s bass player for years, he was just Emmylou Harris’s musical director on her last tour. Jim and (Scott's wife, singer/songwriter) Pearl are writing partners, they’ve written all of Pearl’s solo material together. We love Mother Superior, this kick-ass three-piece rock band from L.A. They’ve been gone for about seven years. I turned 50 last December. My birthday present to myself was, I cherry picked my 12 favorite Mother Superior songs, I put a band together, and we played a concert in the jam room in my house for like twenty of our friends, who are really into Mother Superior. The vibe in the room was so good. It was me, Jim Wilson, Pearl, John Tempesta (formerly of White Zombie, Exodus and Testament) on drums and Joey Vera (formerly of Armored Saint and Fates Warning, and briefly of Anthrax) on bass. We crushed it.”