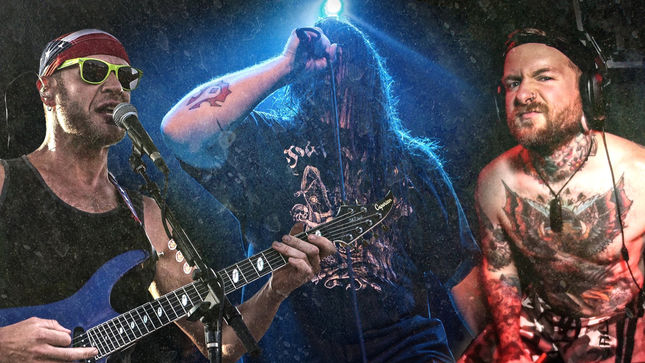 After seven years in the making, this highly anticipated project will finally be releasing their self-titled debut on October 28th via Metal Blade Records. For a first preview of the album, the single "The Vengeance in Me" is streaming below.

The origins of Serpentine Dominion can be traced back to 2009's Rockstar Energy Drink Mayhem Festival, which boasted a lineup that included Killswitch Engage, Cannibal Corpse, and The Black Dahlia Murder. During that fateful summer, Killswitch Engage guitarist Adam Dutkiewicz made a proposition to Cannibal Corpse vocalist George "Corpsegrinder" Fisher: "George, I want to write you a record."

On the Mayhem Fest tour, Shannon Lucas, who performed with The Black Dahlia Murder through 2012, was tapped to record drums on the album. Between 2009 and 2016, Cannibal Corpse and Killswitch Engage released three albums each, so scheduling time to work on Serpentine Dominion was no easy feat - but when their rigorous schedules allowed, Serpentine Dominion began to come together, with Killswitch Engage vocalist Jesse Leach penning the lyrics, which touch on corruption within the government, religion, big business, and other timely issues. Ultimately, though, this debut is a pure passion project; it was written and recorded simply for why musicians get into music in the first place: fun.

“Intro”
“The Vengeance In Me”
“Vanquished Unto Thee”
“Divide, Conquer, Burn, And Destroy”
“Sovereign Hate”
“On The Brink Of Devastation”
“Jagged Cross Legions”
“Prelude”
“This Endless War”

“The Vengeance In Me”:

Serpentine Dominion can be pre-ordered now at this location in the following formats: