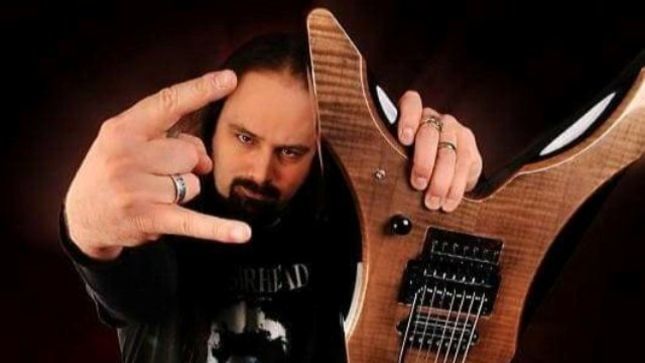 US crushers Shatter Messiah have posted a new video from the studio featuring guitarist Curran Murphy (ex-Nevermore, ex-Annihilator) laying down some new solos for a future album release.

"Curran having waaaaaaaaaayyyyyy too much fucking fun recording solos. Thought this was supposed to be grueling and miserable! What the fuck?!"

Murphy recently checked in with the following:

"Hello all. We have been silent for a while and I think we are ready to get LOUD. I have finally found some time to get some things organized in the world of Shatter Messiah, and now I am ready to share what has come from it.

Shatter Messiah's third album, Hail The New Cross, was released years ago under extreme duress for me and the band. The label 'up'ed' our release date while I was on a small vacation with my future wife, and I had to re-mix and partially master the album myself with less than two days to accomplish this! Woo-FUCKING-hoo... the album was released to excellent reviews and strong press... the the president of the label, the guy that signed us and loved us... died! Everything about the record release died with him.

Not only was this a record that Bobs and I are extremely proud of, but it is the debut album of our new singer, Michael Duncan. Mike was replacing the incredible and wonderful singer, Greg 'Wags' Wagner, who left the band to do his own thing again. It was extremely sad, infuriating and frustrating time for the band. I had this great record on my hands with incredible musicians and a new singer that killed it on his performances, and no one could get their hands on the record! I was able to finally get the rights to the album back and moved onto the fourth Shatter Messiah album, Orphans Of Chaos.

So, I have been able to find the time to go back to the masters for Hail The New Cross. I was never satisfied with the mix, the sound, or some of my performances on the record. I have re-mixed, re-tracked, and re-mastered the entire album. I am very happy with the results. I will be figuring out artwork and a new release date for this album. I may do a digital only release, or I may seek an actual label re-release for the record. Not sure yet.

So there you go. Now I will move onto another 'lost' Shatter Messiah album. Keep your ear balls peeled."

Murphy has since posted video of himself re-tracking his solos and working on the "lost" Shatter Messiah album. Check the clips out below.