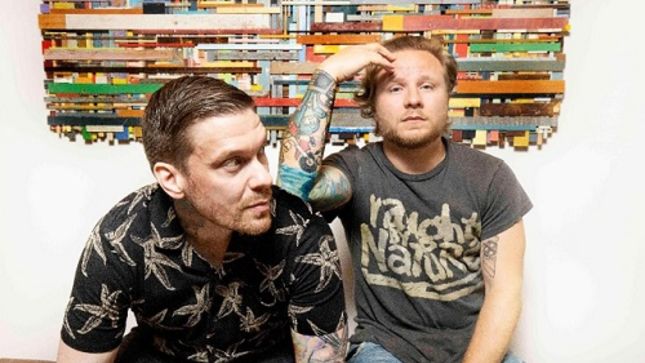 Smith & Myers – the duo comprising the multi-platinum artists Brent Smith and Zach Myers – have released their full-length album Smith & Myers Volume 1 via Atlantic Records – and have unveiled a brand new video for album track, "Panic!".  The acoustic track reflects on how social media’s reactive nature can perpetuate misinformation and panic.

Volume 1 showcases Smith & Myers’ eloquent songcraft, indelible melodies, and glorious vocals created with nothing more than a microphone and an instrument or two. The album features five original songs, including lead single "Not Mad Enough" which was written in the immediate aftermath of George Floyd's death and addresses systemic and racial injustice, and five re-imaginings of fan submitted songs including a poignant version of Neil Young’s "Rockin' In The Free World", an upbeat acoustic rendition of Post Malone’s "Better Now", a standout version of The Righteous Brothers’ "Unchained Melody", and takes on Inxs' "Never Tear Us Apart" and The Zutons’ "Valerie" (full track listing below).

On October 23rd, Smith & Myers release Volume 1's sister album, Smith & Myers Volume 2. The first original track taken from Volume 2, "Bad At Love", is a vulnerable, personal song about the difficulties of staying in a romantic relationship when you have a gypsy heart. The duo also recently released a grungy, re-imagined version of Billie Eilish’s "Bad Guy". Volume 2 is available for pre-order now and also features five originals and five covers including Oasis’ "Don’t Look Back In Anger", Peter Gabriel’s "Sledgehammer", Billy Idol’s "Rebel Yell", and R.E.M.’s "Losing My Religion".  Both the CD and LP - which collect Volumes 1 and 2 in one package - are also available now for pre-order. The Double LP is pressed on 180 gram vinyl and available in a limited edition, exclusive Shiny Black vinyl in the S&M store. The vinyl will be released November 13th.

Additionally, Smith & Myers bring their powerful live show to fans with a string of drive-in shows across the US this October. For tickets and more information, visit smithandmyersmusic.com.